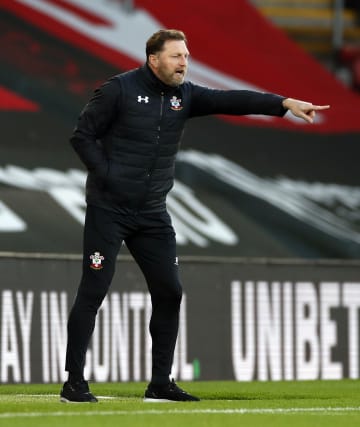 Southampton manager Ralph Hasenhuttl believes hard work is behind his squad’s transformation, rather than any Christmas miracle.

The Saints head to Fulham on Boxing Day looking to keep pace with the chasing pack, sitting just three points off second spot.

It has been a remarkable turnaround under the Austrian, whose appointment in early December 2018 came with a basic remit of keeping the club in the Premier League.

Hasenhuttl paid tribute to the efforts of everyone buying into a new mindset.

“It sounds boring, but it was with hard work so it was no miracle, only hard work on the pitch,” the Saints boss said.

“When I see players like Jan Bednarek or Jannik Vestergaard, their game with the ball, Ori (Romeu) and Prowsey (James Ward-Prowse), the number 10s, also Kyle Walker-Peters – they were all coming here and were far away from how they are playing now and this is why I am really happy with what we do at the moment.

“Against the ball we have always been a good organised team, but the decision-making after winning the ball and what we do with the ball now is of a higher level – and this is what I didn’t expect, that it goes this quick to be honest.

“We had against Manchester City 48 per cent possession and this was by far one of the best footballing performances we have had, even though we did not score a goal.

“We don’t want to change our style completely, we are only a possession team, but if you take care of every part of your game then it is more complete and successful.

“This is what we are trying and the way we went so far with this team was an interesting one and so far now also a successful one.”

During an unbeaten run of seven matches earlier this season, Southampton briefly topped the table .

While Saints fans may be again dreaming of a return to European football, former RB Leipzig boss Hasenhuttl will not allow talk of just what this group could achieve to distract him from the job in hand.

“When you struggle for such a long time here in this club for three years against relegation, there is also a mentality that is not prepared for having seven-game unbeaten runs,” the Southampton boss said.

“This is also the mentality that you believe more in what you are doing. I think this was the most important thing that we changed, the mentality.

“We are now in a good way. It is still not possible to win every game, but we must learn from our mistakes and I think we have.

“The rest is about taking it consistently to the highest level.”