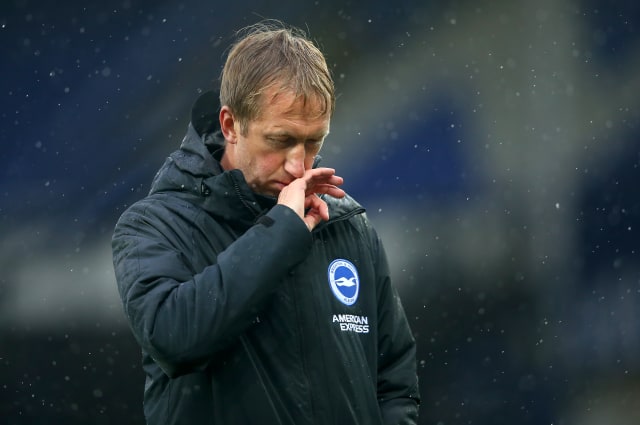 Brighton boss Graham Potter concedes that plunging into the Premier League relegation zone could deal a psychological blow to his under-performing players.

Albion will fall into the bottom three ahead of Sunday’s trip to West Ham if fellow strugglers Fulham defeat Southampton on Boxing Day.

The Seagulls have not occupied the drop zone since briefly doing so in August 2017, when they lost their opening two top-flight fixtures under Chris Hughton following promotion.

“Psychologically I am sure it becomes more challenging at some level,” he said of the prospect of being in the bottom three.

“At the same time, that’s what you have to face. You can’t shirk away from it.

“At any point in this league, if the results have maybe not gone the way you would like them to go for a period, then the consequences are there.

“And that is what we are trying to do – get more points and change our situation.

“But the opponents are doing the same. It is not a straightforward process, but certainly we are giving everything we can and we want to try to do everything to improve our position.”

Brighton, who have won only once in their past 12 top-flight games, hold a favourable head-to-head record against West Ham.

They are undefeated in the six previous Premier League meetings between the clubs, winning the first three before registering three successive draws.

Potter insists past results are irrelevant as he prepares to pit his wits against Hammers manager David Moyes.

“It is just one of those beautiful quirks of football,” he said.

“I am sure David will say the same thing – what has happened in the past doesn’t necessarily influence the game on the 27th.

“Both teams start again and we have to earn the right to get the points.

“We certainly won’t be gaining too much confidence from what happened previously. Sometimes you get those little stories that are a bit quirky but they are there to be changed.”