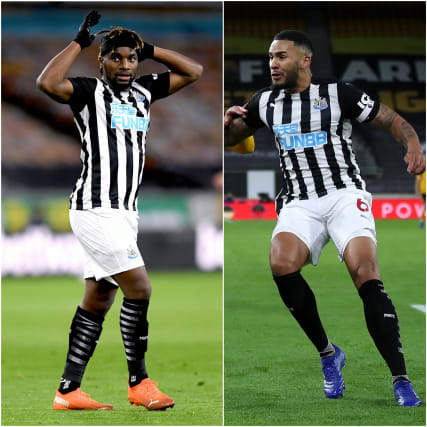 Newcastle manager Steve Bruce says he cannot put a timeframe on the returns of star man Allan Saint-Maximin and captain Jamaal Lascelles as both continue to suffer the after-effects of Covid-19.

There were rumours circulating that the pair had been absent from the team lately due to a bust-up, but it has since been confirmed they had tested positive for coronavirus.

And the illness has hit the key duo so hard they will definitely not be available for Newcastle’s nightmare run of festive fixtures against Manchester City, Liverpool and Leicester.

“There’s been a lot written, so I’ll try and put the record straight,” said Bruce.

“They are not ready to return until the doctors tell us. They’ve got symptoms. Everybody’s different with the symptoms.

“Certainly we expect them to be back but how long? I really can’t put a timeframe on it. Probably Jamaal before Allan.

“But we hope we can see an improvement in the both of them and they can join the squad in the next week, two weeks, maybe.”

Saint-Maximin is arguably the club’s most creative player and his presence has been sorely missed.

The 23-year-old winger returned home to France to recuperate with his family.

“He’s only a young fella, and it’s wherever he wanted to decide to self-isolate,” added Bruce.

“He had 10 days back in Newcastle and has proved negative with a test. But it’s the after-effects that the medical people are not happy with at the moment. We just have to accept it.”

The pressure is mounting on Bruce following a rocky patch on and off the pitch, culminating in Tuesday night’s Carabao Cup quarter-final defeat at Championship Brentford.

The last thing the 59-year-old needs on Boxing Day is a trip to City, the scene of a 5-0 defeat last season.

But he insisted: “That’s the Premier League, that’s what it is. We managed to get a result (a 2-2 draw at home) against them last year.

“We got heavily beaten at the Etihad. We’re playing against one of the great teams. Let’s dust ourselves down after what happened the other night and get ready for a huge challenge.”