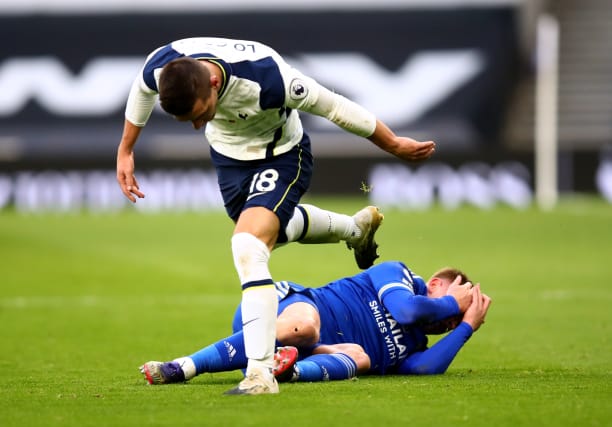 The Argentina international picked up a hamstring injury in Sunday’s loss to Leicester and is set for a spell on the sidelines during a busy run of games, which starts with a trip to Wolves on December 27.

Mourinho said: “Gio no, he will not be fit. I don’t know how long he will be out, I believe that he will not be playing in this period of Christmas and New Year for sure.”

Fellow midfielder Tanguy Ndombele will be available at Molineux, however.

The Frenchman was withdrawn at half-time against the Foxes and then was not part of the travelling squad to Stoke in midweek, where Spurs booked their place in the Carabao Cup semi-final.

Mourinho insists there is no fitness issue and he will involved against Wolves.

“Tanguy is fit but he didn’t come to Stoke. My decision, but he is fit,” he said.

“If I could (have) nine he would have been at Stoke, but I could only have seven. If I had him I couldn’t have had Dele or other players. So I left some players behind. I left (Steven) Bergwijn, Tanguy, Serge Aurier.”

Mourinho opted to use Harry Kane for 90 minutes in the cup game with Stoke, despite being in the middle of a hectic run of fixtures, and it paid off as Kane scored during a 3-1 victory that moves Spurs two wins away from winning a trophy.

It was this time last year when Kane suffered a hamstring injury which kept him out for six months, but Mourinho intends on using him against Wolves.

“I hope he plays the next match again,” he said. “It was Wednesday, the next match is Sunday, I believe a player like him that works hard and takes good care of himself with a great professional life I believe in three days he will be ready to play against Wolves.”

Spurs will assess Gareth Bale after the Wales international came off at Stoke with a calf injury.

Bale put his side ahead in the first half but felt a niggle and asked Mourinho to come off at the interval.

Japhet Tanganga (shoulder) will miss out.