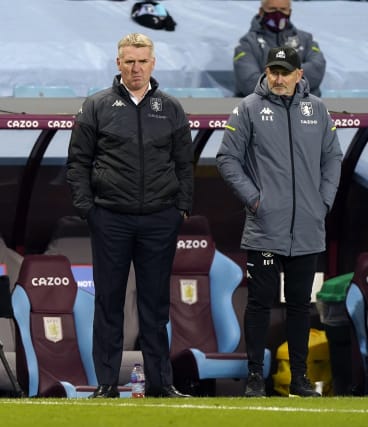 Villa host Palace on Boxing Day in a game which epitomises their change in fortunes.

They were seven points adrift of safety when they hosted the Eagles in July with just four games to go last season.

A 2-0 win provided the springboard for their final-day survival and they now sit ninth in the Premier League, three points behind the top five with two games in hand.

Smith said: “It does (sum up the speed of the transformation). It was a big game. Trezeguet got a couple of goals in that game and it was a really good performance.

“It was what we needed because we had played well in a number of games but not got points or the wins we felt we deserved.

“That was what kickstarted the comeback from seven points and retaining our status. Now we have Palace in a big game,” added Smith, who is wary of a backlash from Roy Hodgson’s men following last weekend’s 7-0 home mauling by Liverpool.

“They have just been beaten seven by Liverpool which can happen against Liverpool and Man City.

“But we feel we are in a good place at the moment and we need to make sure we are ready for a smarting team who will want to get back to the performance they produced against Tottenham not so long ago.”

Villa will train on Christmas Day, breaking a long-held belief from Smith as he usually prefers to give his players the day off.

He said: “We’re in on Christmas Day. I felt that with limited festivities this season and households not being allowed to mix as much and, with two really important games, it was important we’re in.

“I have always (previously) had a feeling I would get little out of the players on Christmas Day because they want to rush in and rush out.

“I’ve compromised. We’ll have an early start. They won’t be in as long but we’ll be working hard now for the upcoming games.”