5 things we learned so far at PDC World Championship 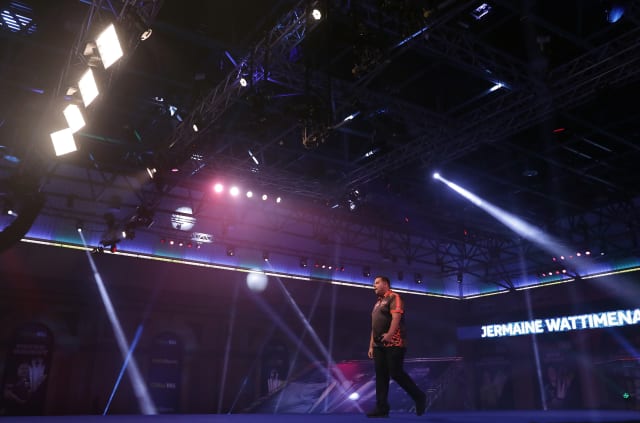 A PDC World Championship that looks a lot different to usual has reached the midway stage as players break for Christmas.

Before play resumes on December 27, the PA news agency takes a look at what we have learned so far from the action at the Alexandra Palace.

American Danny Baggish, playing in his second PDC World Championship, set up a third-round clash with Premier League champion Glen Durrant after an emotional upset of two-time world champion Adrian Lewis. Baggish, 37, was playing after learning that his brother had suffered a stroke back at home. “I got a message in the morning from my sister and she didn’t mean to send it to me knowing I was over here,” he said. “My oldest brother suffered a severe stroke and he had to be brought into emergency surgery to get the clot out of the brain and he’s in ICU as we speak. Harrison, I love you, this is for you.”

A tournament best known for its raucous crowds and party atmosphere has looked and sounded very different amid the pandemic. When it began on December 15 London was still in Tier 2 of the restrictions, allowing a small number of fans in but with fancy dressed and chanting banned. The subsequent move to far stricter restrictions has seen the event played out behind closed doors, and Lewis blamed the lack of crowd for his defeat to Baggish.

The lack of crowds has not prevented players from enjoying their full walk-on routines. Among the highlights so far was Chengan Liu’s choice of Westlife’s ‘You Raise Me Up’ as his entrance music, while Russian debutant Dimitry Gorbunov did his best to wrest the nickname ‘Dancing Dmitry’ from Belgian Dimitri Van den Bergh as he announced his arrival to the sounds of Star Pilots’ ‘In The Heat of the Night’.

Down on the farm

Among the upsets in the opening week was Dirk van Duijvenbode’s victory over former world champion Rob Cross. The 28-year-old, best known for his hardcore entrance to the sounds of DJ Typhoon’s ‘Glimpse of the Future’, works on an aubergine farm when he’s not honing his game. But his stock has risen considerably since he relinquished his place on the Pro Tour this time last year and he is now aiming for a place in the top 32 with a good performance here. He will face Adam Hunt next.

The upsets continued on Wednesday as Jason Lowe saw off fourth seed Michael Smith, adding to the sense that the tournament remains wide open this year. Last year’s finalist and current top seed Michael van Gerwen remains in good form, but third seed Gerwyn Price struggled in his second round win over Jamie Lewis as he set up a meeting with Brendan Dolan.