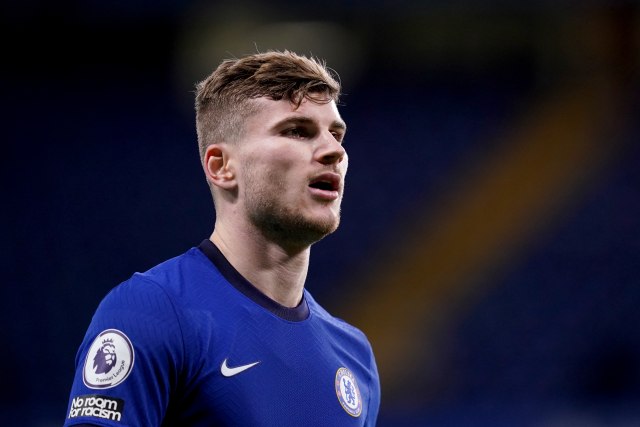 Frank Lampard has insisted Timo Werner is not frustrated by his nine-match goal drought at Chelsea.

Germany forward Werner has admitted to “struggling” in recent weeks, despite having initially warmed to life at Chelsea and in the Premier League.

The £53million summer recruit from RB Leipzig did practically everything but score in Monday’s 3-0 win over West Ham.

And Blues boss Lampard remains convinced that Werner will quickly fire back into goal scoring form.

“I talk to him all the time but I don’t sense frustration,” said Lampard.

“I think it’s clear that as a striker you want to be scoring regularly, as he has done in his career.

“But at the same time every striker has moments when the ball doesn’t drop for you for whatever reasons.

Chelsea will face Arsenal at the Emirates Stadium on Boxing Day, before hosting Aston Villa on Monday, December 28.

The Blues could be without injured full-backs Reece James and Ben Chilwell, with Lampard conceding the duo are “doubtful” for both matches.

Chilwell has an ankle issue and James a knee concern, leaving Emerson Palmieri, Marcos Alonso and club captain Cesar Azpilicueta likely to fill the full-back berths for both quick-fire matches.

While Werner has been drawing blanks in front of goal of late, Lampard admitted he continues to hit the target when it comes to his attitude and application.

“Honesty is a good thing, whether it gets taken in the right context or not I’m not always sure,” said Lampard.

“We crave honesty and then we sometimes hang on every word.

“I don’t think Timo underestimating is quite the right feeling of what he feels.

“I know he wanted to come here and be a success, I know he understood the rigours of the Premier League.

“It’s just a fact that when you’re here in action it’s different challenges.

“So I don’t think you can talk so much about that until you’re here.

“He’s talking about his experiences and, as I said before, he’s getting lots of chances and he will score a lot of goals for us.”