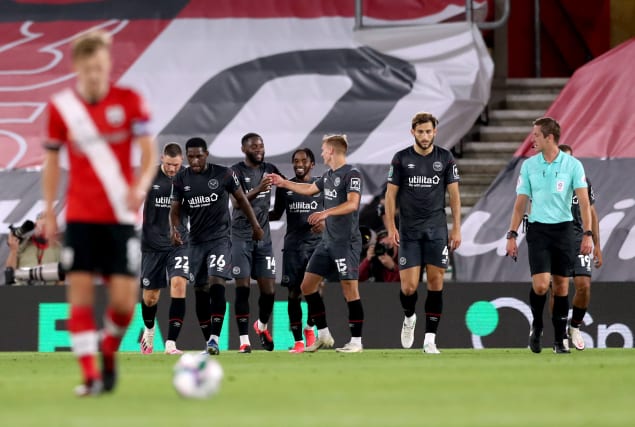 Brentford are through to the Carabao Cup semi-finals following victory at home against Newcastle on Tuesday night.

It was the fourth time in their historic run that the Sky Bet Championship outfit – last season’s beaten play-off finalists – have got past Premier League opposition.

Here, the PA news agency looks at the scalps the Bees have taken en route to the last four.

Despite boss Thomas Frank having made a number of changes and only naming five substitutes, Brentford pulled off a 2-0 victory over a near full-strength Saints side at St Mary’s in round two. Christian Norgaard put the visitors in front with a 40th-minute header, and Josh Dasilva added a finish in first-half stoppage time.

Frank’s men triumphed at a top-flight ground once again in the third round, this time on penalties after a 2-2 draw at the Hawthorns that saw them twice fight back from a goal down. After Hal Robson-Kanu scored second-half spot-kicks either side of an acrobatic Emiliano Marcondes equaliser, Marcus Forss then drew things level again with a penalty of his own. In the shootout that followed, David Raya saved Grady Diangana’s effort before Norgaard converted to seal Brentford a 5-4 win.

Having seen off a side that beat them to automatic promotion last term in Albion, Brentford then eliminated their play-off final conquerors as they ran out 3-0 winners at home against Fulham to book a maiden League Cup last-eight spot. Forss opened the scoring in the first half and Said Benrahma, making his penultimate appearance for the club before joining West Ham, added a brace after the break.

The Bees advanced to the first major cup semi-final in their history with a 1-0 victory over the Magpies sealed by Dasilva. The England Under-21 midfielder netted in the 66th minute of the contest at Brentford Community Stadium as he tucked away a Sergi Canos cross.