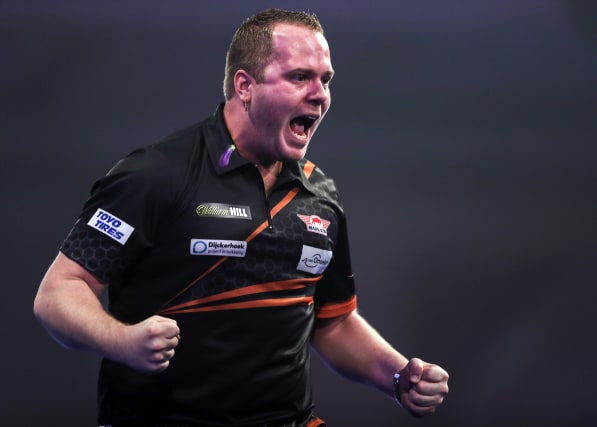 Cross, the 2018 champion who beat Peter Taylor in the final on his tournament debut, was edged out 3-2 by Dutchman Dirk Van Duijvenbode in a thrilling contest during Tuesday’s evening session.

Earlier, Lewis, who claimed back-to-back world titles in 2011 and 2012, had lost against American Danny Baggish, who broke down in tears following his unexpected 3-1 victory.

Cross, the fifth seed, took the opening set 3-1 with a 90 checkout, averaging 104.8, only for World Grand Prix finalist Van Duijvenbode to land three 180s as he levelled things up.

The Englishman edged the third set 3-2 – but Van Duijvenbode, an administrative assistant on an aubergine farm in the Netherlands, responded again as five more maximums saw him claim the fourth set to force a decider.

Cross had the darts and landed a double top to close in on victory, but Van Duijvenbode continued to battle and forced a final-leg shoot-out.

After Cross hit 126 to seemingly set up 12 for the match, Van Duijvenbode then took out 99, finishing on double 18, to pull off another impressive win.

Van Duijvenbode, who will face Adam Hunt for a place in the last 16, said on PDC social media: “Every leg was close, so I just kept it in my head to keep on going.

“No one can give me more pressure than I do myself, I was never a favourite in any game at the Grand Prix, and I proved them wrong – I like to be the underdog and prove that I can play.”

Lewis, meanwhile, had earlier paid for a slow start, missing 15 darts at doubles during the opening two sets.

Although ‘Jackpot’ started to find his range in the third set with finishes of 84 and 127, it was only delaying the inevitable as Baggish landed a 170 checkout before completing a 3-1 victory.

The American will next take on 2020 Premier League winner Glen Durrant.

“I’m so happy. That is a special win for me,” said Baggish, who dedicated the impressive performance to his brother, Harrison, who had suffered a severe stroke at home in Florida.

“That was for my brother. I’m really emotional and that’s why I let it all out at the end.

“It has been a difficult and emotional 24 hours, but I am doing him proud at that means everything.”

Baggish, who knocked out Australian Damon Heta in the first round, added on www.pdc.tv: “People have written me off before both games, but I will keep showing them.”

Elsewhere during the afternoon session, Simon Whitlock, the 2010 runner-up, had seen off Lithuania’s Darius Labanauskas in five sets, landing 10 maximums.

Brendan Dolan recorded a 3-1 win over qualifier Edward Foulkes, who is based in Nagoya, Japan, to secure his place in the third round against world number three Gerwyn Price.