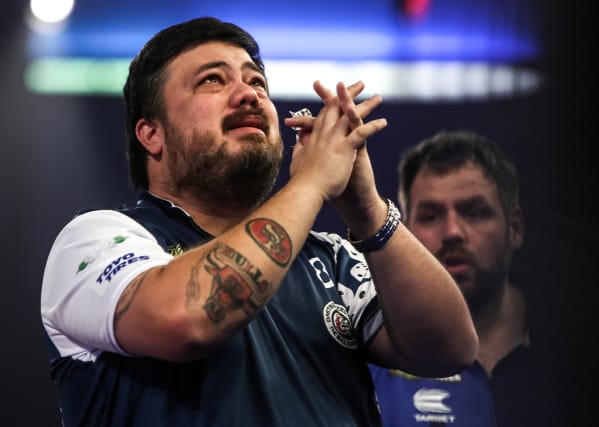 Lewis, who claimed back-to-back world titles in 2011 and 2012, paid for a slow start, missing 15 darts at doubles during the opening two sets.

Although ‘Jackpot’ started to find his range in the third set with finishes of 84 and 127, it was only delaying the inevitable as Baggish landed a 170 checkout before completing a 3-1 victory.

The American will next take on 2020 Premier League winner Glen Durrant.

“I’m so happy. That is a special win for me,” said Baggish, who dedicated the impressive performance to his brother, Harrison, who had suffered a severe stroke at home in Florida.

“That was for my brother. I’m really emotional and that’s why I let it all out at the end.

“It has been a difficult and emotional 24 hours, but I am doing him proud at that means everything.”

Baggish, who knocked out Australian Damon Heta in the first round, added on www.pdc.tv: “People have written me off before both games, but I will keep showing them.”

“Darius is a fantastic player. I knew I had to play my best darts to beat him and I was able to play some fantastic darts to get the job done,” Whitlock said.

Brendan Dolan recorded a 3-1 win over Japanese qualifier Edward Foulkes to secure his place in the third round against world number three Gerwyn Price.