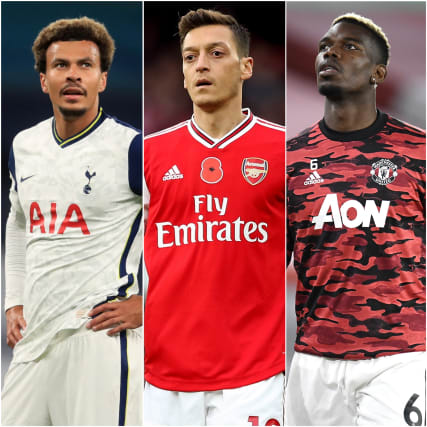 Mesut Ozil and Dele Alli are among a number of players who could be looking for a fresh start in the January transfer window.

Here the PA news agency takes a look at five players might be pushing for a move ahead of the opening of the transfer window on January 2.

Ozil is the highest-paid player in Arsenal history, but was omitted from manager Mikel Arteta's Premier League and Europa League squads this season. Ozil was a mainstay of the team when Arteta first took charge, but has not played a minute for the Gunners since March 7. Although his contract at the Emirates lasts until the end of the campaign, the former Germany international said earlier this season he was disappointed to have been left out of the squad and that his loyalty to the club had not been reciprocated, so could push for an earlier move to get some much-needed playing time.

The 24-year-old has not started a Premier League game for Tottenham since the opening day of the season, but came off the bench in recent league games against Crystal Palace and Liverpool and could be involved in the Carabao Cup quarter-final against Stoke. The England international has been limited to just 10 appearances for Jose Mourinho's side this season, compared to 38 last term, and has scored just two goals, both in the Europa League. With Euro 2020 coming up this summer, Alli could look to move to improve his bid for a place in Gareth Southgate's squad.

The 28-year-old is out of a contract this summer, and has been linked with a loan move in January to Sheffield United. Lingard has been limited to just two appearances this season, both in the Carabao Cup in October. However, the midfielder was already being left out towards the end of last season where he made only two post-lockdown Premier League appearances.

Although Pogba's agent Mino Raiola said the midfielder is unlikely to leave Old Trafford in January, he has also stated that the France international was unhappy at the club and was open to a change. Pogba posted a message on Instagram suggesting he had no intention of going anywhere soon, although his form under Ole Gunnar Solskjaer has been far from consistent and he made just 22 appearances last season.

Jose Mourinho has said that Winks will not be departing in January but the England midfielder has fallen out of the manager's first-choice side and has mainly been restricted to Europa League action this season. Winks has said he is desperate for game time to try and force his way into the England side for next summer's tournament, but currently that appears unlikely. Mourinho confirmed the 24-year-old had been to see him over his lack of game time, and a loan move in January remains a possibility.