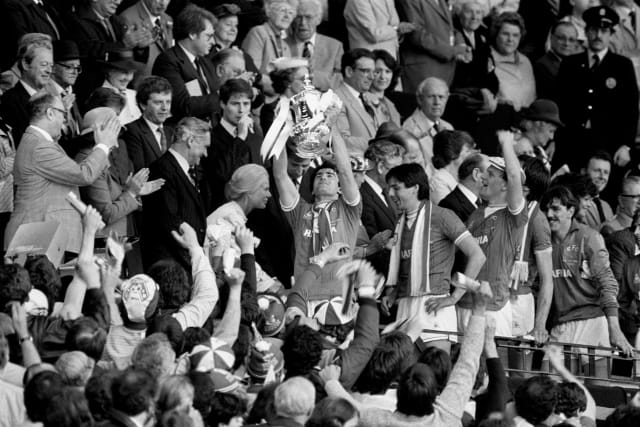 Former Everton midfielder Trevor Steven believes winning a trophy is the catalyst Carlo Ancelotti’s side needs and wants to see them go on the front foot against Manchester United this week.

The pair meet at Goodison Park in the quarter-finals of the Carabao Cup on Wednesday with the Toffees having hit perfect form with three successive Premier League victories.

Everton’s last trophy was the FA Cup in 1995 and, after a few false dawns, under the experienced Ancelotti this seems their best chance of ending that barren run.

Steven won two league titles and a UEFA Cup Winners’ Cup with the great Toffees side of the mid-1980s but insists it would not have been possible without their FA Cup triumph of 1984.

He believes bringing a first piece of silverware back to Goodison Park in more than a quarter of a century could be the springboard to better things as it was for him and his team-mates under Howard Kendall.

“This is an opportunity which is there. Manchester United seem to be finding some goalscoring form but they do concede.

“What I would like to see is a front-foot performance from Everton and I think Carlo has managed to build up that bottom line so the bad performances are not so bad.

“I think it is an opportunity and one which I wouldn’t say is a bonus, but I’d say it is worth getting a strong line-up out there to go all the way because there is nothing like wining a trophy to create self-belief and cement self-belief with a group of players which has a lot of talent.

“Everton are there with a really good fighting chance of going for a trophy and Carlo would also recognise that for Everton would be a huge step forward.”

Everton are currently surpassing expectations in the Premier League, in contention for Champions League qualification after recovering from a blip of one win in seven matches after their best start to a campaign in over a century.

Steven believes Ancelotti, after six months to assess what he inherited from Marco Silva when he was appointed exactly a year ago, has succeeded in levelling out some of the inconsistencies which have hampered previous managers.

“Considering Carlo has been a the club a year it has been amazing what he could do,” added Steven, a mental health ambassador for a construction-specific software business Causeway Technologies which has donated £200,000 to the build and development of The People’s Place, Everton in the Community’s proposed purpose-built mental health building in the shadow of Goodison Park.

“I don’t think Champions League is a conversation anyone would want at the moment as there is far too much football to be played.

“Without over-coaching people it is about belief, playing for each other and 100 per cent commitment and that doesn’t happen by accident, it happens because you have a manager who understands football as much as anyone who is actively coaching now.

“It is dealing with the crises which come along in regards to the fitness of your team, it is being a bit lucky every now and again, it is getting momentum.

“What has pleased me up to this stage of the season for Everton is that they had momentum, lost momentum and regained momentum.”