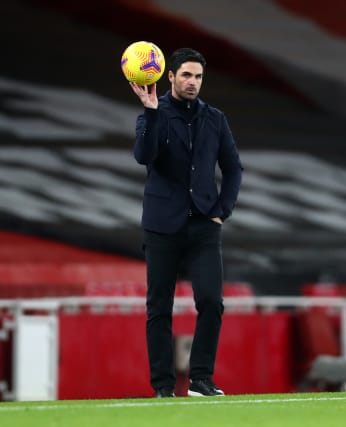 Arsenal boss Mikel Arteta has warned anyone not willing to battle to turn things around at the club has no place in his dressing room of fighters.

Defeat at Everton on Saturday leaves the Gunners 15th in the table and without a Premier League win since November 1 – a run of seven games where they have taken just two points.

A toothless attack has been part of the problem and only the current bottom three sides have managed fewer than Arsenal’s 12 goals and now captain and usual go-to goalscorer Pierre-Emerick Aubameyang is sidelined with a calf problem.

Arteta’s position as Arsenal boss is coming under increasing scrutiny due to the poor run of results and performances and he has received public backing from both chief executive Vinai Venkatesham and technical director Edu over the past 10 days.

The Spaniard, who took the job just over a year ago, has suggested he has no plans to walk away and feels he has a squad of players who are willing to fight to address the slump.

“You have two types of people: fighters and victims,” he said.

“You need fighters and you don’t want any victims. Victims bring excuses, victims bring negativity and they start to blame anything that is happening around them or is not going their way.

“You need people who fight, people who contribute and people who are ready to give everything to the club in this moment.”

Asked if he felt he had enough fighters among his ranks, Arteta added: “Yes we do.

“But some of them can doubt in any moment because when you find yourself in this situation you are tempted to go to the other side and start to say ‘Oh, we are scoring own goals, we cannot play with 10 men, then we don’t have the crowd and the referee made these decisions’. I’m sorry but we don’t need any of those.

“There are people who are very contagious and can transmit a certain level of energy. When you have a lot of them it’s very easy.

“You always have some on one side, some in the middle and some completely on board. Then you have to drag as many people as you want into your side, to the fighting side.

“And the ones who are not interested or cannot do it, they have to stay behind because if not they are dragging you back.”

One player who has received flak recently is club-record signing Nicolas Pepe.

He scored the equaliser from the penalty spot in the loss at Everton but was highlighted for criticism by Match of the Day pundit Alan Shearer later in the day.

The Ivory Coast winger has shone in the Europa League this season and, even though he continues to flatter to deceive domestically, he retains the backing of Arteta.

“I would always defend my players,” he said.

“Whatever I have to discuss with him, it will be internally. Pepe wants to do his best and help as much as he possibly can. This is what I am interested in. It is my job and if he doesn’t, it is my fault.

“He feels the responsibility because be knows why the club brought him here and he wants to deliver that.”