Leigh Griffiths: I won’t be at Euro 2020 if I don’t play games and score goals 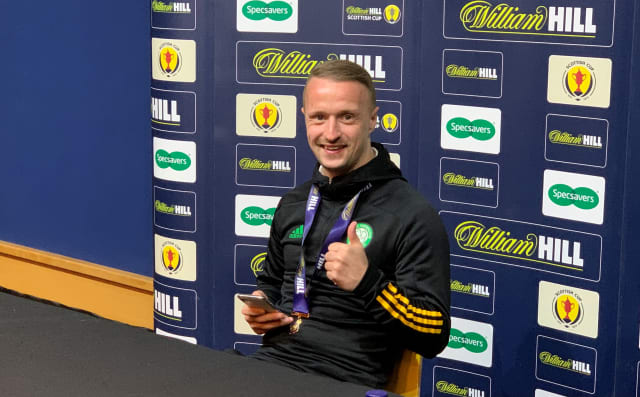 Leigh Griffiths has the Euro 2020 finals on his mind after helping Celtic win the William Hill Scottish Cup final on Sunday.

The Hoops striker has struggled to pin down a regular place in Neil Lennon’s starting line-up in this campaign after returning to pre-season training with fitness issues.

However, the 30-year-old Scotland international showed yet again what he can do when he came off the bench in extra-time against Hearts at Hampden Park with the game tied at 2-2.

Griffiths struck from close range to give Celtic the lead and although Josh Ginnelly levelled to take the match to a penalty shoot-out, the former Hibernian striker stepped up first for the Parkhead side to score from the spot before the Hoops emerged 4-3 winners.

Scotland’s first qualification for a major finals since 1998 saw them drawn in Group D along with England, Croatia and the Czech Republic for a tournament delayed until next summer due to the coronavirus crisis.

Asked about Euro aspirations, Griffiths said: “It is something to look forward to in the summer but I won’t be there if I don’t play games and keep scoring goals.

“So from now until at least March, I want to get a good run of form and still be in Steve Clarke’s plans.

“We have four strikers here all vying for the one place just now, with the formation we go with.

“It is about working hard in training and trying to make an impact when you can, if you can come off the bench.

“Hopefully I have done that and given the manager a wee bit of a headache going forward.

“He said after the game that I need to get fitter. Well that green stuff, the pitch, I need to be on that to get match fit.

“I am not unfit. I am fit. But just not match fit and you can tell. Obviously I have not had a run of games.

“Hopefully I can get a wee run now and get my fitness right back up.

“There is a difference between being fit and match fit and you need to play games to get match fit and the more minutes I get the fitter I will be.

“Luckily I have still been in squads, still been on the bench and have just been unfortunate that Patryk (Klimala) got the nod but I got the nod on Sunday and managed to make an impact so hopefully it’s my turn now.”