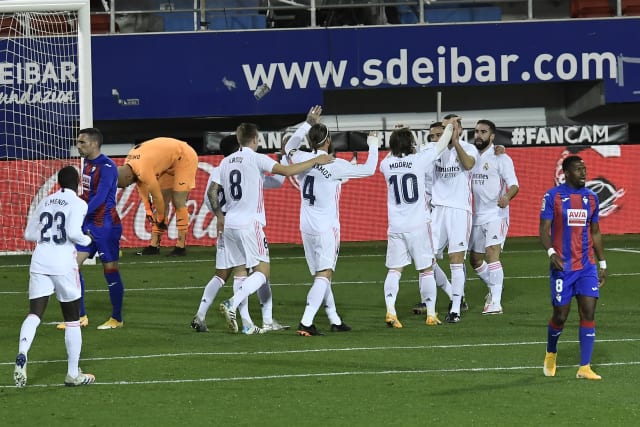 Real Madrid moved level with rivals Atletico Madrid at the top of LaLiga with a 3-1 win at Eibar while in Italy AC Milan forward Rafael Leao scored the fastest goal in Serie A history.

Like rivals Barcelona, Real’s form has come under scrutiny in the early stages of the season but a fast start on Sunday secured a win which sees them join leaders Atletico on 29 points.

Goals in the first 13 minutes from Karim Benzema and Luka Modric put Zinedine Zidane’s side in command and though Kike pulled one back, Lucas Vazquez scored a late clincher.

Granada are level on points with Barca after a 2-0 win over Real Betis thanks to Roberto Soldado’s first-half brace, the opener coming from a penalty.

Brais Mendez scored both goals as Celta Vigo beat Alaves by the same scoreline while Getafe were also 2-0 winners at Cadiz, Juan Hernandez and Nemanja Maksimovic with the goals.

In Serie A, Rafael Leao earned a place in the record books as AC Milan maintained their lead at the top of the table with a 2-1 win at Sassuolo.

The Portuguese striker found the net after just six seconds, breaking a 19-year-old Serie A record held by Paolo Poggi, who scored after eight seconds for Piacenza against Fiorentina.

Milan burst forward straight from kick-off and Hakan Calhanoglu’s pass split the defence and found Leao, who fired into the corner of the net.

Alexis Saelemaekers doubled Milan’s lead ahead of half-time before Domenico Berardi’s 89th-minute free-kick gave a glimmer of hope to the home side.

Second-placed Inter stayed a single point behind their city rivals despite a sluggish 2-1 win over Serie A newcomers Spezia.

Antonio Conte’s men had to wait until the 52nd minute before Achraf Hakimi broke the deadlock, and Romelu Lukaku’s 71st-minute penalty all but wrapped up victory despite Roberto Piccoli’s strike in stoppage time.

Lazio beat Napoli 2-0 with goals from Ciro Immobile after 10 minutes and Luis Alberto in the second half.

Genoa are now winless in 12 Serie A games after crashing to a 2-0 defeat at Benevento, Roberto Insigne and a late Marco Sau penalty doing the damage.

Roberto Soriano scored a late goal to snatch a 1-1 for Bologna at Torino, who led through Simone Verdi, while Cagliari and Udinese also drew 1-1.

Paris St Germain remain third in Ligue 1 after a goalless draw with leaders Lille, who had the best chance when Burak Yilmaz’s powerful strike was well blocked by Presnel Kimpembe.

Les Dogues are level with Lyon on 33 points, with PSG one behind. Marseille are fourth but were joined on 28 points by Rennes, who won 3-0 at Lorient.

Damien Da Silva opened the scoring in the first half and goals from Benjamin Bourigeaud and Martin Terrier in the second period made the game safe.

The day’s other games in France were drawn, with St Etienne v Nimes and Brest v Montpellier both finishing 2-2 and Nantes held 1-1 by Angers.

Wolfsburg moved fourth in the Bundesliga with a 1-0 win over Stuttgart, Josip Brekalo with the only goal.

Freiburg beat Hertha Berlin 4-1. Vincenzo Grifo’s opener was cancelled out by Dodi Lukebakio but Ermedin Demirovic, Manuel Gulde and a late Nils Petersen penalty made it a comfortable win.