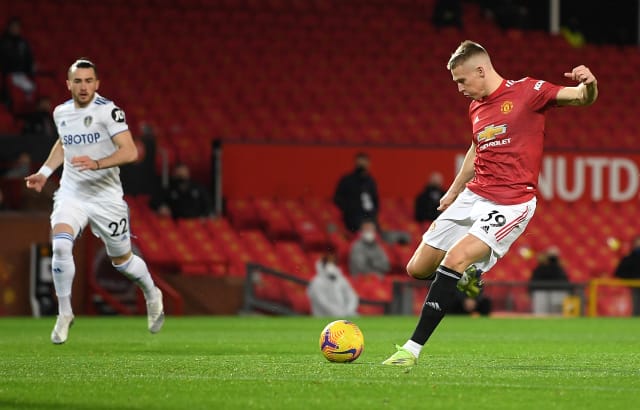 Ole Gunnar Solskjaer was delighted by the way Manchester United hit rivals Leeds for six after “physical monster” Scott McTominay got the ball rolling with a record-breaking early brace.

A lot has changed since these old foes last met in the Premier League, with the Norwegian going from substitute in that February 2004 encounter to celebrating two years at the Old Trafford helm in style on Sunday.

McTominay set the tone by becoming the first player in Premier League history to score twice in the opening three minutes of a match, with Bruno Fernandes and Victor Lindelof also netting in the first half.

Liam Cooper pulled one back for Leeds just before the break, but Daniel James and a Fernandes penalty put the hosts further ahead before Stuart Dallas scored a stunning consolation as the match ended 6-2.

“Fantastic game by the boys,” United boss Solskjaer said. “We know they’re going to challenge you, test you physically, tactically as well because it’s a different game.

“It’s almost like going back to the old German teams with a sweeper and the rest man marked.

“We had to find a way of creating space, stopping them and of course when we get the start we did it helps.

“But they keep coming until the end and I think we showed that we can physically match them.”

Solskjaer said it could have been 12-4 after a thrilling match in which United had to make do with six goals – the first time they have managed that many in a home league game since Sir Alex Ferguson retired.

“I’m very, very happy with the way we created chances and the amount,” he said. “We had some fantastic moves, great moves and some individual skills.

“But, yes, sometimes you look at it and ‘come on, let’s put the ball in the goal’.

“But we can’t be greedy. Marcus (Rashford), Anthony (Martial), Mason (Greenwood), who are our main centre forwards, didn’t get onto the scoresheet today and we still scored six, so very happy.”

McTominay was the star man in Sunday’s win and Solskjaer was full of praise for the academy graduate, who is a doubt for the Carabao Cup clash at Everton with a groin injury picked up towards the end of the match.

“We knew they were high-energy and intense moments,” the United boss said. “But the movement of the front lads and the cleanliness of some of the moves made Scott that space in front of him with the ball at his feet.

“He’s a physical monster. He does all his work every single day meticulously – never shirks anything and he gets his reward by his fitness.

“His technical work as well is improving, the space in front of him he can run (into).

“He can do everything. He used to be a striker and knows how to score goals. I think he proved today that he’s a handful in and around the box as well.

“I’m very pleased with him and that energy and drive in attack like this was important.”

This was the first time a club managed by Marcelo Bielsa has conceded six goals in a match since February 1992, leaving the Leeds head coach understandably frustrated.

“The way that both teams attacked was different. They took advantage of our misplaced passes when we were trying to create an attack and that’s how they created the majority of their chances.

“When we weren’t able to finish our attacks, our return was not as quick as their transition.

“It’s very difficult to take, we’re very sad and we regret that we weren’t able to make more of the game.”