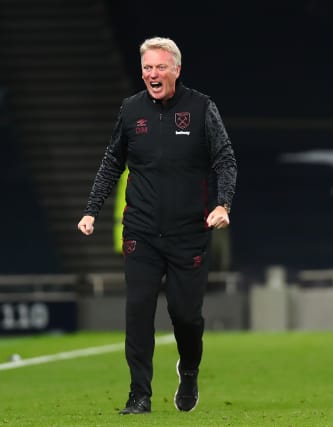 David Moyes does not believe he needs success at West Ham to change perceptions of his managerial record.

The Hammers have enjoyed a strong start to the campaign and go into Monday’s clash with Chelsea just a point behind Frank Lampard’s side.

Moyes was brought in to battle relegation 12 months ago but now has West Ham looking up amid talk of a contract extension.

Combined with the run of form which kept West Ham up in the final games of last season, it is the best spell Moyes has enjoyed since leaving Manchester United back in 2014.

Since then, a manager who was often regarded as an overachiever with Everton endured disappointing stints with Real Sociedad and Sunderland before his first spell at West Ham ended without a contract renewal despite him staving off the threat of relegation in 2018.

But asked if he was changing people’s views of himself as a manager, Moyes said he would be “disappointed” if that was the case.

“Football clubs can sometimes be the wrong place,” he said. “You might not have the level of players required and obviously the manager takes the rap for that.

“Some of the jobs I’ve had have been extremely good, big jobs, some of them haven’t gone as well but maybe not as bad as some people made out.

“Being a football manager, you’re not always going to be successful. It’s very difficult to have a career and be continually successful as a manager.”

Instead, Moyes said he hoped he was changing perceptions of West Ham by playing better football.

“When I came back, I don’t think it was a club that was absolutely loved for different reasons,” he said.

“I’d like it to be loved for the football we play, and I’d like for the connection between the supporters and the club and everybody to be much closer, and if we can the games we can show that.”

West Ham on Friday extended the contract of Michail Antonio to tie him down until the summer of 2023.

Antonio joined the Hammers as a winger when he signed from Nottingham Forest in 2015 but has excelled as a striker more recently, with his goals at the end of last season key to West Ham’s survival.

Although he is now 30, Moyes believes Antonio is still developing into the role and can offer an even greater threat.

“He’s come on so much,” Moyes said. “We put him in at centre-forward due to an injury for Sebastian Haller. He’d played centre-forward before but not on his own, he was not recognised there, but when he got the chance he got the goals and he started to believe.

“His hold-up play wasn’t always great but with the work he put in in training and the development since, he’s got incredible speed and power.”

Antonio has returned to training following a hamstring injury, but Monday’s game may come too soon for him.

“We’ve missed him but it’s a credit to the other players that we’re still picking up points without someone who after lockdown was one of our key players,” Moyes said.