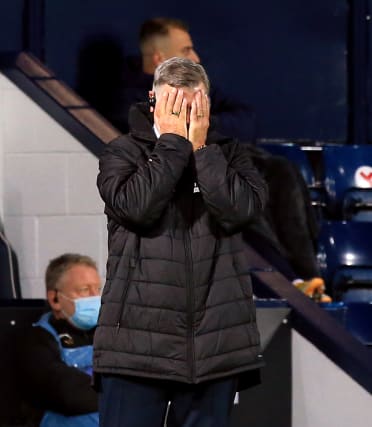 Here, the PA news agency looks at the new manager’s first night at The Hawthorns.

Very few managers come into a struggling club and resist the temptation to change.

Allardyce, rightly, kept faith with the side which bagged an impressive 1-1 draw at Manchester City on Tuesday in Slaven Bilic’s final game.

With nine substitutes he had options to switch during the game, but Jake Livermore’s red card took away the luxury of being able to make his first-choice changes.

Albion’s shape and formation were not markedly different than under Bilic and Allardyce has only had three days with his new squad.

The Baggies were reduced to 10 men when Livermore walked after 35 minutes, meaning any gameplan was soon out of the window.

He switched to 3-4-2 for the final 10 minutes in a bid to salvage a point, but it was ineffective and Villa scored two late goals.

It was a nightmare start when Anwar El Ghazi opened the scoring just five minutes in and the Baggies never settled.

The display did not get much better and, while they had to play almost an hour with 10 men, the hosts failed to show up in the derby.

It was a disappointing performance after the battling point at Manchester City and Allardyce will need his men to improve drastically for Sunday’s trip to Liverpool.

If Allardyce keeps Albion up it will be his greatest rescue job. They do not lack effort or commitment, but the overall quality to survive in the Premier League just is not there.

He will surely make them more organised and disciplined at the back as time goes on, but a question mark remains regarding where the goals will come from.

Striker Karlan Grant has scored just once since his £15million move from Huddersfield, while top scorers Callum Robinson and Conor Gallagher have just two each.