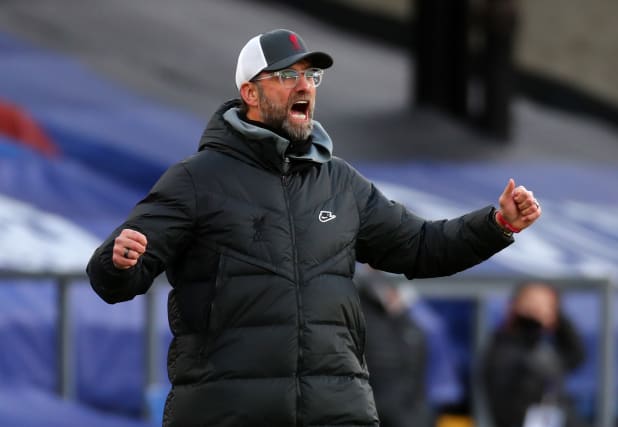 Jurgen Klopp will not read too much into Liverpool being top of the Premier League again at Christmas after the 7-0 win at Crystal Palace but is pleased his side have sufficient time to recover.

The Reds ran riot at Selhurst Park with Roberto Firmino and substitute Mohamed Salah grabbing a brace while Takumi Minamino, Sadio Mane and Jordan Henderson were also on target in a record-breaking win for the Merseyside club.

It was Liverpool’s biggest ever Premier League victory and their joint-largest success on the road in their history to ensure, for the third year in a row, they will sit at the summit ahead of the Boxing Day fixtures.

West Brom, under newly-appointed Sam Allardyce, will visit Anfield a week on Sunday and the German is happy to have a full week to prepare for the match.

Klopp said: “I don’t feel satisfaction, I am happy in the moment absolutely because it was a top game but at a time like this it makes no sense to be over the moon about something.

“The problems and challenges don’t get smaller. For the first time now in what feels like ages we don’t play on Tuesday immediately again.

“I think Crystal Palace felt today a little bit how hard it is to play Wednesday night and Saturday at 12.30pm again. It was tough for us as well, so I don’t think about being top of the table or whatever.

“We are just happy we won the game and now we have more time to recover than we ever had before in this season and we have to use that in a smart way and then West Brom is waiting with Sam Allaryce and the next proper challenge is there.”

Salah was a surprise absentee from the starting XI in south London, but Klopp explained how he was eager to rest the Egyptian after an intense period of matches.

He added: “Mo played the last four games and missed only seven minutes, so it was a massively intense period so it was clear it was him (who needed to be rested).

“And usually you would expect in a game like this against Crystal Palace – because the last few results with us and them were close – to bring him on for the last half an hour would be okay. We did that by the way but it was not exactly the scenario we expected.”

Minamino replaced Salah in the team and took his opportunity immediately with a first ever Premier League goal in the third minute.

The Japanese attacker got off the mark at the 18th time of asking in the top flight and caught the eye of his manager in training.

“We want to use Taki so that’s it and the way we play, if you play for us in midfield you need offensive skills so it means Taki can play there,” Klopp explained.

“He played twice (in midfield) and played good and more important in training he looked sharp and great and that was why he played. He played a top game today, a nice finish and he is in a good moment.

“I saw him in the dressing room and he couldn’t avoid smiling so it’s a good moment. He is in a really good place and it helps us.”

Crystal Palace boss Roy Hodgson cut a forlorn figure at full-time despite the hosts asking plenty of questions of the champions early on.

Jordan Ayew was unable to make the most of a couple of fine first-half openings and Liverpool showed their clinical edge afterwards.

“There is nothing positive I can say,” Hodgson admitted.

“We are humiliated by the result, we take it very badly and for most of us in the dressing room we have not been on the end of a 7-0 defeat and I can’t think of anything positive to say.

“We just have to get over it, there is no point dwelling on it and we have to learn lessons from it.”