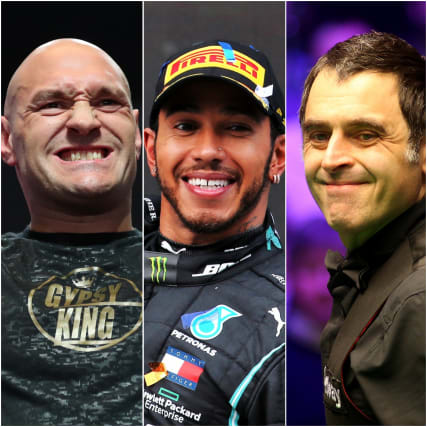 Six sportspeople are in the running to become BBC Sports Personality of the Year on Sunday night.

Here, the PA news agency looks at the contenders to land the award.

Hamilton has won the award once before – in 2014 – and has been the runner-up four times. The 35-year-old from Stevenage has already wrapped up a seventh Formula One world title, tying Michael Schumacher’s record. He now holds the outright record, meanwhile, for race wins, pole positions and podium finishes and is by any measure one of Britain’s most successful sportspeople. Hamilton has also been an outspoken supporter of the Black Lives Matter movement and an advocate for equality within Formula One. Hamilton has been setting records ever since he arrived at motorsport’s top table in 2007, winning his first world title a year later. A switch from McLaren to Mercedes was the catalyst for a period of complete dominance that has seen him claim six titles in the space of seven years, the only exception being when team-mate Nico Rosberg pipped him in 2016.

Like Hamilton, Broad is another hugely experienced figure within British sport. The pace bowler became only the second Englishman after his long-time team-mate Jimmy Anderson to take his 500th Test wicket during the third match against West Indies this summer. Having been left out of the first match, the 34-year-old returned with a point to prove and made it superbly. He took 16 wickets in two matches, with 10 wickets and 62 runs in the third Test. In the following series against Pakistan, he claimed 13 wickets in three matches. Broad has been a key member of the England Test side since making his debut in 2007. He has played in 143 matches, as well as 121 one-day internationals and 56 Twenty20s. The son of former England batsman Chris, Broad has been part of four Ashes-winning teams as well as the side that won the World T20 in 2010, while he has also played county cricket for Leicestershire and Nottinghamshire.

Henderson’s growth from Liverpool misfit to Champions League and Premier League-winning captain has earned him a spot on the shortlist. There would have been long odds against that being the outcome when he turned down a move to Fulham in 2012 to fight for his place at Anfield. In the intervening eight years, Henderson has made himself an integral part of Jurgen Klopp’s side. Captain since 2015, the 30-year-old’s influence peaked last season, and a period of injury made it obvious just what he brings to the side. It was fitting that he should be the man that lifted the trophy, as he was when Liverpool beat Tottenham to win the Champions League in Madrid in 2019. Henderson has also made an impact off the pitch and was widely praised for his leading role in football’s response to the Covid-19 pandemic. Henderson was born in Sunderland and joined the Wearside club aged eight, progressing through the ranks to make his first-team debut in 2008.

This nomination – the first from horse racing since Tony McCoy in 2013 – is the latest milestone in an incredible year for jockey Doyle. In August the 24-year-old became the first woman to win five races on the same card in the UK, at odds of 899-1 at Windsor, and in October she broke her own record for the most winners in a calendar year by a female jockey when she reached 117. In the same month, Doyle, who finished fourth in this year’s race for the Flat jockeys’ championship, registered a brilliant double of victories on Champions Day at Ascot which included her first win at Group One level, aboard Glen Shiel. She also this year claimed her first Royal Ascot win, with Scarlet Dragon, in June. Recently named Sunday Times Sportswoman of the Year, Doyle came through the Herefordshire pony racing circuit, where she met her boyfriend Tom Marquand, who is also now a leading jockey.

While this is a first nomination for O’Sullivan, it would be fair to say success is nothing new to the 44-year-old regarded by many as snooker’s greatest player. An 18-8 victory over Kyren Wilson at the Crucible in August made him world champion for a sixth time, equalling the tallies of Steve Davis and Ray Reardon, one behind record-holder Stephen Hendry. It also saw him overtake Hendry at the top of the all-time list of ranking event wins, with 37, and he has a record 20 Triple Crown titles. The oldest world champion since a 45-year-old Reardon in 1978, the ‘Rocket’ first got his hands on the trophy in 2001, with further triumphs following in 2004, 2008, 2012 and 2013. His maiden ranking title came when he claimed the 1993 UK Championship aged 17. O’Sullivan is the first snooker player to be nominated since Hendry in 1990 – the only one to have won the award is Davis in 1988.

Fury’s nomination has been by far the most controversial, with the boxer sending the BBC a legal letter demanding that he be taken off the shortlist.
He took a remarkable comeback to new heights in February when he won his rematch against Deontay Wilder, with a superb performance over seven rounds, to claim the WBC heavyweight title. After securing the WBA, WBO and IBF crowns with victory over Wladimir Klitschko in November 2015, the self-proclaimed Gypsy King did not have another bout for two-and-a-half years, during which he battled depression and ballooned in weight. Fury went on to fight out a memorable draw with Wilder in Los Angeles in December 2018 three bouts into his return, before this year’s Las Vegas rematch made him world champion again. The 32-year-old was also a nominee in 2015, when there were calls for him to be removed from the shortlist due to comments he had made about women and homosexuality. At the awards he apologised, saying: “If I’ve said anything in the past that has hurt anybody, I apologise to anybody who has been hurt.”