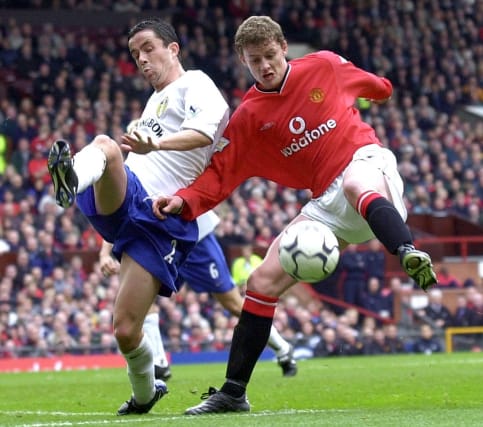 Manchester United manager Ole Gunnar Solskjaer cannot wait to renew hostilities with Leeds this weekend as the old foes finally face one another again in the Premier League.

A lot has changed since the rivals’ last top-flight meeting in February 2004, with only two cup meetings taking place during a period in which the Yorkshire side’s struggles even saw them drop to the third tier.

Solskjaer came off the bench in their last Premier League meeting and loved the regular clashes with Leeds, where his brace in a 4-3 win for Sir Alex Ferguson’s men in 2002 was a particularly highlight.

“I can’t wait,” the former United striker said ahead of the Sunday’s first competitive meeting in nine years.

“It’s a different type of Leeds coming up with a coach that’s really done a great job with them and will test us to the limit.

“There were fiery games, tackles flying in, players from both teams who were winners.

“We had a few fights, of course. Elland Road wasn’t the quietest place when we came off the coach walking into the stadium and in the stadium, put it that way.”

Asked if he had a particularly fond memory of facing Leeds as a player, he said with a smile: “Yeah, many. I enjoyed scoring two goals in a win at Elland Road.

“They were two good teams back in the day, I have to say.

“I liked the build-up to the games and the quality they had of course tested us as a team as well, so loads of good memories.”

Solskjaer oversaw a 4-0 win against Marcelo Bielsa’s Leeds in a pre-season friendly in July 2019, when 55,274 piled into the Optus Stadium in Perth, Australia despite the rivals playing on the other side of the world.

But empty stands will greet the teams when Leeds make the short trip to Old Trafford as the Government’s re-evaluated coronavirus regulations kyboshed plans to welcome 2,000 supporters into the match.

Asked about the likes of Liverpool and Everton having supporters into games when so many other Premier League teams cannot, Solskjaer said: “This is a delicate question to answer because we want fans into the stadiums.

“I can’t see why we should stop the fans coming into the stadium where it’s possible. It’s such a difficult answer to give you.

“I don’t want to stand here and say ‘well, it’s not fair that they get the fans in’.

“Of course it’s an advantage for them because everyone loves the support for their own club, so we’ll just wait and hopefully next time we’ll be open.”

Defenders Eric Bailly and Axel Tuanzebe should be available to face Leeds after overcoming what Solskjaer called “small injuries”, while frontman Edinson Cavani will be assessed before Sunday’s match.

The 33-year-old has been absent for three games with a groin complaint and could soon miss more after being charged by the Football Association following a social media post containing the word ‘negrito’.

“We have spoken to Edinson about it,” Solskjaer said. “He’s apologised. We know it wasn’t meant in a malicious way.

“He’s explained and there’s cultural differences there and linguistic differences. He’s apologised, he hopes that mistake isn’t going to be costly and he’s still working on his fitness.

“He’s very meticulous on his rehab work and he’s not felt right. He couldn’t play this game so let’s see how he feels in the last training session. It was a muscle injury that he felt in his groin.”

United are sixth heading into the weekend, which sees Solskjaer mark two years in the dugout.

“I hate talking about what I think about what I’ve done and where we’re at, so I don’t really enjoy that bit of it!” the 1999 treble hero said after Thursday’s 3-2 comeback win at Sheffield United.

“I always look forward. I know there’s a lot of work to be done still to get to the standard and level I want. That’s what we’re working on every single day.

“But I’ve really enjoyed them two years, even though games like this make my hair turn even greyer very, very quickly!”