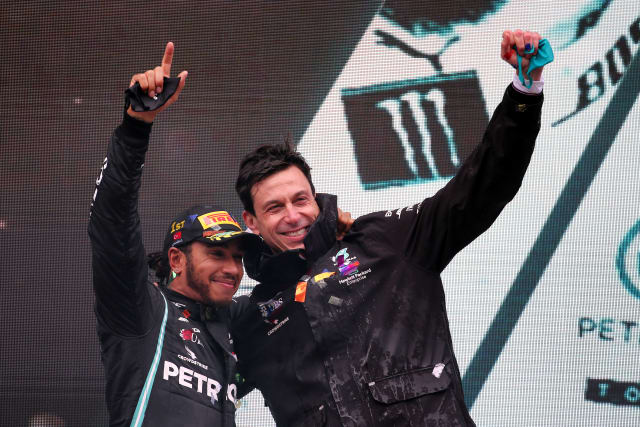 Mercedes boss Toto Wolff has described a new contract for Lewis Hamilton as a “no-brainer” and insists there is no hurry for him to sign on the dotted line.

The English driver claimed his seventh world title last month and sixth in seven years with Mercedes but is not yet tied to the team for 2021.

Mercedes teased that a deal would be confirmed imminently with a tweet on Thursday evening carrying the hashtag ‘announce’ and a quote from Hamilton emphasising his desire to stay with the team.

There has so far been no update, but Wolff said: “We have had such a successful run of championships for the past seven years there is no reason why not to continue.

“He is on the top of his game and he will be for a while, so that is why continuing together is a no-brainer.

“We always prioritised the championship and not being distracted by sometimes difficult discussions, as is the nature of negotiation, and then Covid struck so it has delayed us a bit, but we are not worried in eventually getting it done.

“We are not putting a special date on it. Sooner or later it needs to be done and the latest is when we go testing next year.”

There was contract news on Friday as Wolff extended his role as team principal and chief executive for a further three years.

The team confirmed the deal as part of a re-structuring that will also see INEOS become a one-third shareholder within the team.

Wolff said: “I am pleased to begin this new chapter for the Mercedes-AMG Petronas F1 Team.

“This team is like a family for me. We have been through so many highs and lows together that I cannot imagine working with a better group of people in this sport – and I am very happy to continue together into this new era.”

Under the new arrangement, Daimler will reduce its current 60 per cent holding and Wolff increase his existing portion to create three equal partners within the team.

INEOS previously announced a deal to become a ‘principal partner’ of the Mercedes F1 team in February.

INEOS chairman Sir Jim Ratcliffe said: “When we entered Formula One earlier this year, we chose to do so with a Mercedes team that had set new benchmarks, and since then we have been in discussions about how we could increase our involvement.

“This is a unique opportunity to make a financial investment in a team at the very top of its game, but which still has rich potential to grow in the future.”