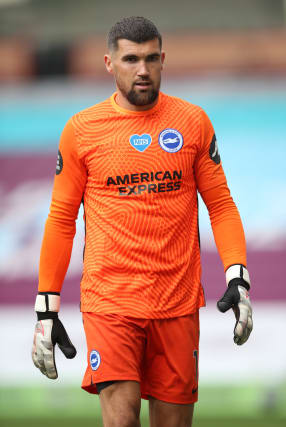 Brighton boss Graham Potter admits he would be willing to allow out-of-favour goalkeeper Mat Ryan to leave the club in January.

Ryan was dropped for Albion’s midweek Premier League draw at Fulham, with inexperienced Spaniard Robert Sanchez set to continue between the sticks for Sunday’s clash with Sheffield United and the foreseeable future.

Potter dismissed suggestions the Australia international has definitely played his final game for the Seagulls.

However, he does not intend to stand in Ryan’s way should he request guaranteed first-team football.

Asked if Ryan will been seen again in a Brighton shirt, Potter replied: “I can’t see into the future. But I wouldn’t say it’s as extreme as that.

“I think you’ve got to be respectful to the professional and his career and his family and his situation.

“On the one hand, we’re saying that we’re going to give Rob a chance and an opportunity and you want to give him that time.

“At the same time, you know the situation may be for him (Ryan) that he wants to be in a better position in terms of somewhere where he is more able to play or move involved in playing.

“I think out of respect for Maty, you’ve got to give him that freedom to do that. But in the end it’s down to Maty and the club.”

Ryan has been a near ever-present since signing following the club’s promotion in 2017 and currently holds the record for the most Premier League appearances made by a Brighton player.

The 28-year-old, bought from Valencia for a then club-record fee, has featured in 121 of 127 top-flight fixtures, one outing more than Albion captain Lewis Dunk.

His omission from Potter’s squad for the stalemate at Craven Cottage was the second time he has been dropped this term after replacement Sanchez was handed his Premier League debut at Tottenham at the start of last month.

Sanchez arrived in England at the age of 15 and, prior to this season, his only first-team action was during loan spells with Forest Green and Rochdale.

Potter is excited by the potential of the 23-year-old and feels he offers different qualities to Ryan.

“Maty has been a top servant for this club. He’s been a brilliant professional to work with for me and I have the utmost respect for him,” said Potter.

“Sometimes you get a sense that for the team, a different attribute can help and I think Rob has those attributes.

“His potential is very, very high and then it’s our job to try and help him fulfil that potential, so that’s the situation.

“He has had two away matches, he’s done well in both of them.

“But, as always, you have start again in this league, you have to prepare again and take the challenge on again and, knowing him, he’ll do that.

“He will have the support of us and let’s hope that it goes well for him.”