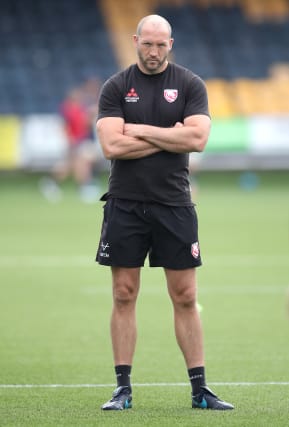 A “hungry” Lloyd Evans has been backed to navigate Gloucester through the season following Danny Cipriani’s departure from Kingsholm.

Evans will return to the fly-half role against Heineken Champions Cup visitors Ulster on Saturday.

He has recovered from a head knock sustained in the Gallagher Premiership loss to Harlequins 12 days ago, reclaiming Gloucester’s number 10 shirt now permanently vacated by Cipriani.

Evans, though, impressed in Gloucester’s comfortable win against Wasps last month, and he has been handed the tactical reins for a game Gloucester must win to have any chance of progressing from Pool B.

“He is young, hungry and is Gloucester through and through. He is really enjoying working with Alex King (Gloucester attack coach) and developing his game.

“He had a great game against Wasps, and he is here for the future. He is doing a great job.

“We are lucky to have Lloyd and George (Barton) coming through, and it puts us in a good spot.

“Lloyd hasn’t had a huge amount of exposure, and both he and George will, going forward.”

Evans’ selection is among a number of changes from the side beaten 55-10 by Lyon last weekend, with other starters including Wales wing Louis Rees-Zammit and number eight Ruan Ackermann.

Skivington added: “We’ve got a good few injuries, and we are managing it the way we think is best.

“I think this season is unique. You lose the international players for a hell of a lot more time than you would normally, and every club is dealing with different scenarios.”

Like Gloucester, Northampton and Sale Sharks lost their opening European fixtures and have effectively reached a point of no return.

Saints boss Chris Boyd makes eight changes from the side beaten at home by Bordeaux-Begles last time out, including a start at fly-half for George Furbank.

Bristol, beaten in an 89-point thriller by Clermont last weekend, face their rugby director Pat Lam’s former team Connacht in Galway, when they will again be without injured centre Semi Radradra.

Lam said: “We have made it difficult to get through, but it doesn’t mean you stop trying, because in rugby and sport you never know what is around the corner.

“I would say, certainly, if you get two losses, you are not going through.

“For us and Connacht, and all the teams that lost in the first round, it’s all on the line this week. It is finals rugby already.”