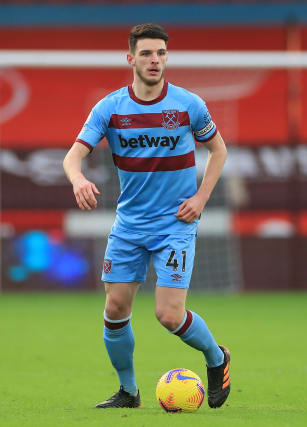 England midfielder Rice progressed through Chelsea’s much-vaunted academy but was released aged 14, before making the switch to the Hammers.

The 21-year-old has since risen to prominence in east London and become an England regular – to the point where he is now a long-term transfer target for the Blues.

Chelsea could have to pay upwards of £50million to sign a player who came through their system and remains best friends with Blues midfielder Mason Mount – but boss Lampard insisted no academy can make the right call with every young player.

“He’s a fantastic player for West Ham and England, so fair play, because his journey there, after leaving Chelsea and going to West Ham, it’s a good story to hear,” said Lampard.

“There are lots of those stories for different reasons, at whatever level and that shows a strength of character. In terms of our end, I certainly wouldn’t use the word regret.

“Our academy is one of the best in the world, you look at our first team and all the players we’ve produced that are in and around the first-team squad, we’ve got so many.

“And it’s not easy, it’s not an exact science to pick or choose players. The academy work brilliantly here to bring through a lot of players.

“Declan Rice has given himself personal credit for going and having the great start to his career he’s had at West Ham.”

Chelsea will host West Ham at Stamford Bridge on Monday night, bidding to hit back to form after consecutive Premier League defeats.

Former West Ham midfielder Lampard conceded however that facing his old club as a manager does not carry the same intensity as when he was a Chelsea player.

Asked if taking on West Ham means more to him given his history with the club, Lampard said: “If I’m honest it did when I played, as a manager and in my role now it doesn’t.

“Maybe I’ve mellowed or something’s changed, but also I focus on what’s necessary for the club. Maybe I took it on me personally to really get up for that game against West Ham because I had played for them before.

“But now I don’t, I just see it as another game, particularly off the back of two defeats for us, it’s an important game just for us to approach in the way of wanting to get back to where we were before these two games.

“I think David Moyes is doing a great job, they have good players, but the way they are playing and the consistency levels they’ve got this season have been really impressive.

“I think he’s an experienced and a very, very good manager who has got his message across to them. And they are playing really well, the organisation of their team, the style that they play, it’s very difficult to play against.

“They have threats on the counter-attack and they are very good at set-pieces, so they are playing really well and are clearly a well-managed team.”

Callum Hudson-Odoi and Hakim Ziyech returned to full training on Friday as the wingers continue to shake off hamstring problems.

Lampard admitted however that both men must still prove their fitness ahead of Monday’s clash.

Lampard added: “It’s their first day back with the group today, training at a decent level, so I’ll have to see how they are in the next few days if they are to make West Ham.”