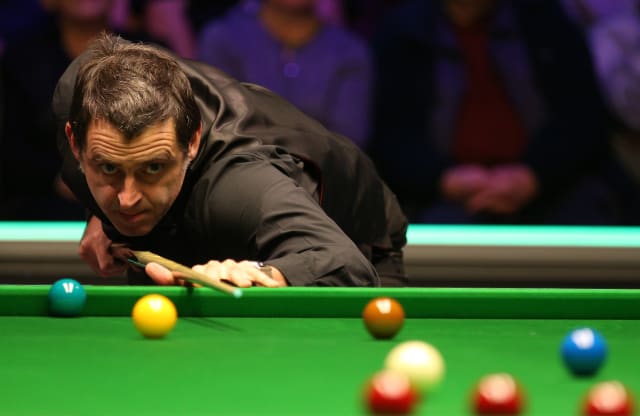 Ronnie O’Sullivan will face Judd Trump in the World Grand Prix semi-finals after coming from behind to beat Kyren Wilson on Thursday.

O’Sullivan battled back from 3-1 down at the Marshall Arena in Milton Keynes to win 5-3 against Wilson, the man he overcame in the World Championship final earlier this year.

A crucial moment came in the sixth frame when Wilson had the chance to clear and go 4-2 up but missed with his attempt to put the pink in a centre pocket and sent the the cue ball in.

There was also a bizarre incident in the match, with O’Sullivan removing his watch after a word from Wilson.

Explaining that situation, O’Sullivan said afterwards in an interview on World Snooker’s official Twitter feed: “It’s like a £9.99 Casio and it bleeps every hour, it’s one of those watches.

“I think Kyren was on a shot and it got to 9pm and it bleeped just as he was about to hit his ball, and he came up to me and said ‘can you put your watch on pause’. And I was like ‘it’s a £9.99 watch mate, I don’t think it has the ability to do that’. So I took it off and gave it to the scorer.

“I was lost without my Casio – I like to time my intervals when I go to the toilet, make sure I’m back on time.”

Trump advanced with a 5-2 victory over Martin Gould, which included the world number one making a break of 142, which equalled Mark Allen’s effort as the highest break of the event so far.

Earlier, Mark Selby safely progressed into the quarter-finals as he beat Anthony McGill 4-2, but John Higgins and Ding Junhui made last-16 exits.

And Zhao’s compatriot Ding was defeated 4-1 by Iran’s 37th-ranked Hossein Vafaei, who will now face Selby in the last eight.

Zhao next plays Jack Lisowski, a 4-0 victor over Robert Milkins in a match lasting 58 minutes.