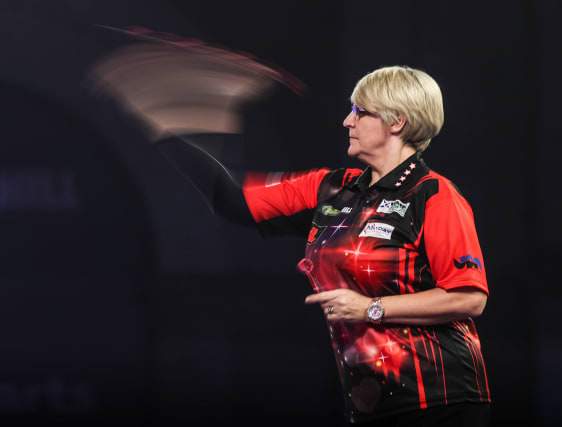 Lisa Ashton narrowly failed in her bid to emulate Fallon Sherrock and progress in the PDC World Championship at Alexandra Palace.

The four-time women’s world champion missed three darts to force a deciding leg as she went down 3-2 to Adam Hunt.

Ashton was aiming to follow in the footsteps of Sherrock, who became the first female player to beat a man in the tournament 12 months ago.

She seized the first set on the bull but, after Hunt drew level, Ashton missed two darts for a 2-0 lead in the third set and Hunt nudged in front for the first time.

Ashton pulled back to force a deciding set and had her chances at 2-1 but after missing three darts at double eight, Hunt served up a 120 finish to move into round two.

Chris Dobey mounted a concerted fightback to keep his campaign alive with a second-round win over Jeff Smith at Alexandra Palace – where there were no fans in attendance following London’s move into tier three of coronavirus restrictions on Wednesday.

The Canadian took the first two sets with the number 22 seed missing doubles, but the Englishman scrapped his way back into it to level at 2-2 before taking the final set 3-0, hitting four 100-plus checkouts along the way.

Dobey told Sky Sports: “I went in at the break disappointed – I missed so many doubles in the first two sets and fair play to Jeff, he hit everything. I dug in deep, as I always do, and came out the winner.”

Earlier, Ryan Joyce had edged past Czech Republic number one Karel Sedlacek into the second round after a final-leg thriller.

Joyce, who will now face Krzysztof Ratajski, bust on 106 at 2-2 in the deciding set, but eventually clinched the match with a double seven after his opponent had passed up four match darts in the leg and six in total.

The second and third sets both went to deciding legs in an encounter which was tighter than the scoreline suggested.

William O’Connor was not pushed as hard by another first-timer, Holland’s Niels Zonneveld, as he eased to a 3-0 victory and a date with Daryl Gurney in the second round.