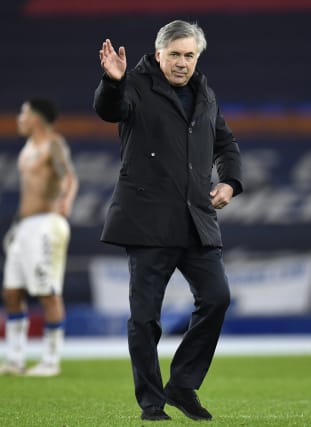 Carlo Ancelotti warned Everton that they cannot afford to slip up in the race for the Champions League after a clinical 2-0 win at Leicester.

Goals from Richarlison and Mason Holgate clinched victory at the King Power Stadium as the Toffees closed the gap to the top four.

They are fifth in the Premier League, just a point and a place behind the Foxes, after building on Saturday’s victory over Chelsea.

Leicester had a late penalty overturned but organised Everton were always in control and boss Ancelotti knows they need to maintain their standards.

“We are where we want to be. If the season finishes today we will be satisfied,” said the Italian, who lost Allan to a hamstring injury in the first half.

“Unfortunately the season is so long and we have to keep fighting to stay in this position.

“We were able to repeat the same performance we did against Chelsea. We were solid defensively and when we had the opportunity we scored.

“We were well organised and it is an important result. We were comfortable defensively, they had more of the ball but they didn’t have opportunities to score.

“The back four are working well together, compact, solid and we don’t push a lot with the full-backs so it’s difficult for them to find us out of balance.

“It was not a penalty, Andre (Gomes) touched the ball, clearly.”

Off-colour Leicester rarely looked like winning as they suffered a fourth home defeat in seven league games this season.

Everton took the lead after 21 minutes when Kasper Schmeichel failed to keep out Richarlison’s low effort from 20 yards.

Jamie Vardy immediately headed straight at Robin Olsen but the Toffees had a platform and they sat back after the break and allowed Leicester to dictate.

The Foxes – missing their first-choice defensive pairing of the injured Caglar Soyuncu and banned Jonny Evans – dominated possession but the visitors struck a decisive second with 18 minutes left.

Schmeichel denied Michael Keane’s glancing header before turning Dominic Calvert-Lewin’s follow up onto the bar – only for Holgate to smash in the rebound from close range.

Leicester’s night was summed up in the final 10 minutes when Lee Mason reversed a penalty decision after initially awarding a spot-kick following Ayoze Perez’s tumble under Andre Gomes’ challenge.

Mason changed his call after viewing the monitor before Perez had a goal disallowed for offside.

Boss Brendan Rodgers said: “We’re disappointed with the first goal. It was going to be important and we could have been much better in that moment.

“I thought we should have had the penalty and that would have given us 10 minutes to push on.

“It was a surprise because down on the side you could hear the contact and Lee was right on it. He has looked at it and the image he is looking at is not the one which clearly shows Ayo getting clipped on his foot. We’re disappointed to get that overturned.

“But we are a third of the season gone and I never lose that sense of perspective.

“In the bigger picture the players have done well up until this point and we have to take our medicine tonight and look to the next game.”