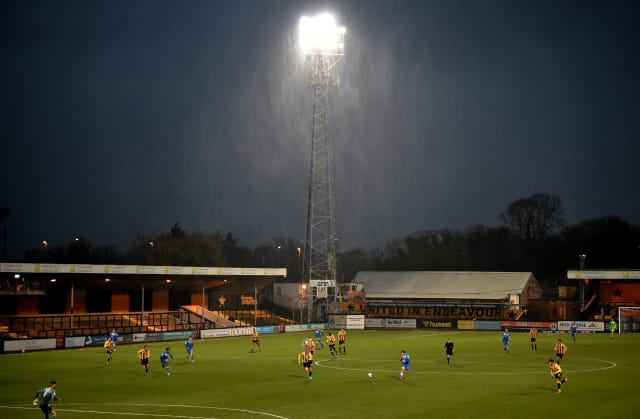 Cambridge manager Mark Bonner condemned the “unacceptable” booing of his players taking a knee on Tuesday, when a fan was ejected for the same behaviour at fellow League Two side Exeter.

The return of a limited number of fans in to watch professional football was marred in the first weekend back by the conduct of some fans at the English Football League matches hosted by Millwall and Colchester.

The Football Association launched an investigation after players were booed for taking a knee in those games on December 5, while there were more such incidents in League Two on Tuesday evening.

Exeter ejected a spectator from the ground after booing was heard when players took a knee in support of the Black Lives Matter movement ahead of their 2-1 loss to Harrogate at St James Park.

A statement from the club read: “Exeter City Football Club would like to thank the vast majority of supporters who supported our players when they took the knee as part of tonight’s EFL wide campaign.

“Unfortunately one supporter was ejected from the stadium and the club will take the appropriate action.”

Cambridge’s match was also overshadowed by fan behaviour, with a small number of supporters booing their players before Tuesday’s 2-1 win against Colchester at the Abbey Stadium.

Manager Bonner said: “A small number of fans let our club down tonight.

“What pleases me most is the small minority that booed were soon drowned out by loud applause by the majority that understand that this is about systemic racism and inequality. We’re right to back that message.

“We’ve clearly got more work to do because that behaviour’s unacceptable.

“We don’t want the light shone on our club for those reasons. We’re trying to be a club that stands out for all the wrong reasons. I want to condemn that behaviour.”

Cambridge players Harvey Knibbs and Kyle Knoyle both posted on Twitter that they were “appalled and embarrassed by the section of fans who booed” the players taking a knee, saying “it’s 2020 and the action is a symbol of solidarity”.