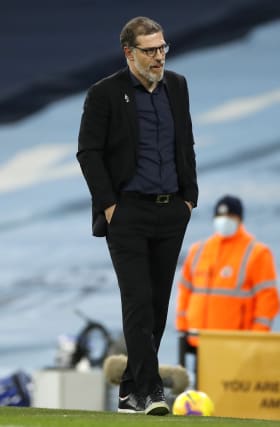 Slaven Bilic insisted West Brom’s draw at Manchester City showed his message is still getting through to players as speculation over his future continued despite the result.

The 52-year-old has been tipped to be the first Premier League managerial casualty of the season, with reports emerging even after the final whistle at the Etihad that the move could come on Wednesday.

Asked if the result showed West Brom were still playing for him, Bilic said: “I do not like that cliche.

“The players are playing for themselves but they are listening to our game plan and it’s really good to see your players fighting like this.

The result ended a run of 13 straight league defeats for West Brom against City, though they needed two huge saves from Sam Johnstone in stoppage time to keep out Ilkay Gundogan and Raheem Sterling.

Gundogan had put City ahead 30 minutes in though it was, remarkably, the hosts’ first clear sight of goal as West Brom defended well, and got their reward as an own goal from Ruben Dias levelled the scores before the break.

“I asked the guys to believe,” Bilic said. “I told them to enjoy it, to play with a smile on their face but that starts with hard work.

“It was not a bonus game because every game is an opportunity. I told them to treat it as a privilege because this time last year we were in the Championship.”

Bilic spoke of using the game as a platform to build on, saying: “It is more than a point. We have to use this to get the know-how for what we have to do in every game.”

It remains to be seen if he will get the opportunity to do so when West Brom host Aston Villa at the weekend.