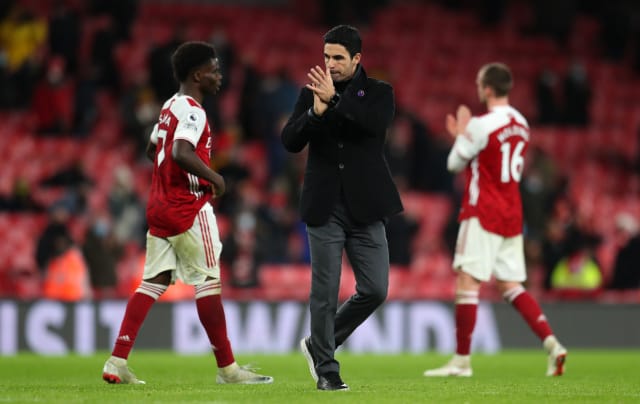 Mikel Arteta insists Arsenal’s wretched form remains a “blip” and not the descent into a Premier League relegation battle.

Arteta shouldered the full blame for Arsenal’s seventh defeats in their opening 12 Premier League matches – calling on critics to fire all their shots at him as the manager.

Asked if he still retains the backing of his players, Arteta replied: “My feeling is yes but this is a question for them obviously.

“When I see the reaction and the way they try, there’s not one bit that worries me that they’re not trying their best, that’s for sure.

“And in terms of Edu and Pep, they obviously showed their appreciation, because in good moments it’s very easy. In difficult moments when you have people like them giving you support and two people that know very, very well what we’ve been through here, obviously it’s much appreciated.”

Arteta is not concerned that Arsenal now face an unthinkable relegation battle and is confident that results will turn soon.

“I want to think that we are in a blip, losing football matches makes me believe that but we need to start to win,” Arteta added.

“Because just dropping and dropping down the table is not the situation we want to be in.

“It’s not time to hide, it’s time to put your face and your body on the line and at the moment, I’m sorry, but we have to take the bullets.

“We are not winning football matches and I have to put my chest there and you have to hit me, because you have the right to hit me because I’m not winning.

“So what else can I do? Put my head down, work harder and try to do things better and improve. That’s how we have to approach things in my opinion.

“It’s natural, I accept the criticism and it’s part of the job.

“When you’re not getting results at the end of the day it’s the manager who has the maximum responsibility. So that’s what I accept.

“You can explain whatever you want but at the end of the day you have to win football matches and this club is too big to accept this many losses in the last weeks. So my chest is here and hit me, guys.”

Granit Xhaka’s red card and Pierre-Emerick Aubameyang’s own goal condemned Arsenal to a 1-0 home defeat to battling Burnley on Sunday.

The Gunners host high-flying Southampton at the Emirates Stadium on Wednesday, with Arteta throwing his support behind the embattled midfielder Xhaka.

Asked if Xhaka had apologised to Arteta and his team-mates, the Arsenal boss said: “Well whatever happens internally I’m sorry but I cannot discuss.

“It’s been resolved internally and this is all I can say. He has had tough times here and he’s not the only one, there’s a lot of players that have had rocky moments.

“But what I can say about Granit is that his professionalism and his commitment with the club and with his team-mates is maximal.

“He knows and we all know that he had a moment where he’s lost it and I know the reason why. But what I cannot do is just throw everything that he has done away because he’s made a mistake.

“We all make mistakes and I am here as well to protect the players when I see that they deserve that.

“And for sure Granit is one of them, for the way that he approaches every training session, for the way he wants to do things in the right way all the time and for the professional that he is.”