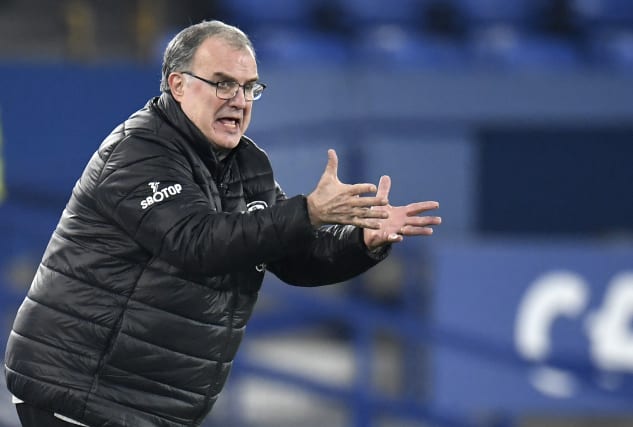 Marcelo Bielsa insists Leeds do not have a particular problem defending from set-pieces ahead of the visit of Newcastle in the Premier League on Wednesday.

For all their impressive displays going forward, the Whites have frequently been chaotic at the back on their Premier League return, particularly from free-kicks and corners.

At Elland Road on Friday, Tomas Soucek and Angelo Ogbonna benefited from Leeds’ defensive frailties as West Ham came from behind to win 2-1 with two towering headers, but Bielsa believes it is not something which needs to be addressed on the training ground.

“We’ve conceded four goals from set pieces and the circumstances which highlight this problem is that it happened in two consecutive games,” the Argentinian said.

He added: “It’s normal, it’s natural that our best headers come up against the best headers in the Premier league, it’s normal that they can lose these duels, and if we compare our efficiency with our set-pieces in an attacking sense compared to our defence then the data is very similar.

“We’ve managed to score a similar amount of goals to the ones we’ve suffered as a result of this problems, that’s to say that the others don’t defend especially much better than us in this sense.”

Bielsa added: “There are a lot of questions that I answer without a lot of conviction, because when they ask me ‘how do you resolve the problems in the defensive set pieces?’ It’s a lot more linked to the things I have just mentioned than the training that can be done.”

Leeds have conceded 22 goals in their 12 matches this season, while only netting 17 at the other end in a run which has included just four clean sheets, but Bielsa said the headed goals conceded were by some of best aerial players in the league.

“If you heard what I said previously, the conclusions on which you based your questions are not the same,” the Leeds boss said.

“My conclusions are that we conceded four goals and of those four goals, three of those goals have been scored by three of the best headers (of the bal) in the Premier League.

“And the other goal that we conceded in this sense, (Tomas) Soucek had a 15cm advantage over who was marking him and I think of course we have to know and this that you proposed that the training is going to resolve it’s a truth but it’s a half-truth.”