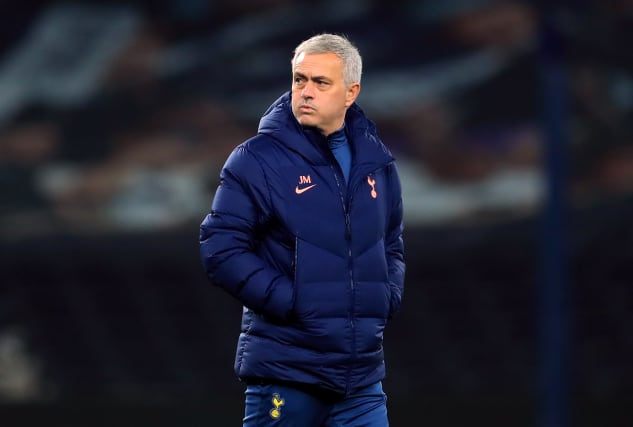 Tottenham boss Jose Mourinho has played down the severity of Liverpool's injury list ahead of the top-of-the-table clash at Anfield on Wednesday.

Reds counterpart Jurgen Klopp has had to deal with a congested treatment room in recent weeks amid a packed fixture list and will be without Virgil Van Dijk, Joe Gomez, Diego Jota, Kostas Tsimikas, James Milner, Thiago Alcantara and Xherdan Shaqiri against Spurs while Naby Keita and Joel Matip are doubts.

But Mourinho insisted Liverpool's strongest team has not been affected and Van Dijk is their only major absentee.

"Van Dijk is injured and Van Dijk is a very good player of course. But give me Liverpool list of injuries and compared that list with what is the best Liverpool team.

"Injuries are normal. James Milner is injured, Lamela is injured. You know. Every club has injuries now and again. Liverpool has a big injury. Which is Van Dijk."

Spurs travel to Anfield on the summit of the Premier League after going 11 games unbeaten since the opening day of the season.

Klopp has praised Mourinho for the work he has done at Spurs, saying he has turned them into a "results machine".

Mourinho says his side's impressive results have occurred over too short a time frame for that to be true and they are still behind Liverpool in their development.

"But I think it's too early, and the period of good results is about a few months and a results machine of course is much more than that.

"A result machine is what Liverpool has been for the past couple of years, a result machine was what my Chelsea was in the period we won the two consecutive titles.

"We are the result of work of 390 days, but these 390 days are fake, because probably lots of these days were not even days of work but days of quarantine, days of being at home unable to work.

"So from almost 2,000 to 300. For us to be able to compete at the level we're doing I can only give credit to the players and be very, very happy with what they're doing."

Spurs are likely to be without Gareth Bale at Anfield as the Wales international is suffering from an illness, which is not Covid.

Mourinho said: "We still have training session this afternoon.

"Yesterday he didn't train with the team. He trained inside, not even outside. In this moment I'd say not but let's wait for the feelings and let's see the training session."

Harry Winks has been unable to get into Mourinho's Premier League side, prompting speculation that the midfielder could leave the club next month.

Winks has said he needs minutes in order to get into Gareth Southgate's England side at Euro 2020 and Mourinho confirmed his player has been to see him.

"Yes he came to me. He came to me, not just him," he said. "Many players come to me. I have my office on the first floor but I also have a little space on the ground floor next to the players' dressing room where I used to be before and after training session to make it easy for them.