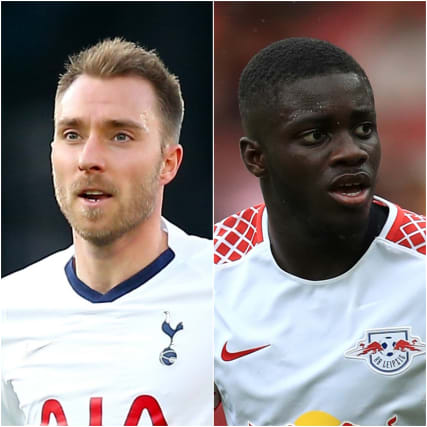 Christian Eriksen is keen on a move to Paris St-Germain and would turn down offers from Premier League clubs, the Daily Star says. Eriksen, who left Tottenham for Inter Milan at the start of the year, is holding out for a call from the French side after failing to make a mark in Serie A, according to the paper.

Manchester United have calmed their interest in RB Leipzig’s DayotUpamecano, says the Daily Mirror. The 22-year-old is said to be keen on moving on from the Bundesliga side and has a £38million release clause and was one of Ole Gunnar Solskjaer’s top targets over the summer with United opting against a bid.

Sticking with Old Trafford, and left-back Brandon Williams could be leaving the club in January. The Daily Telegraph writes the 20-yaer-old academy graduate could be heading to Southampton on loan.

Arsenal could look to French side Reims to solve their goalscoring problems, according to the Sun. The paper writes the Gunners will make a move for Boulaye Dia who has found the net 18 times in 50 games since arriving in 2018. Dia, 24, is behind only Kylian Mbappe in the golden boot standings this season.

Also at Arsenal, Mesut Ozil could be heading to the MLS when his deal at the Emirates runs out at the end of the season, the Sun says. Clubs including DC United, LA Galaxy and Inter Miami could make an offer for the World Cup winner.

Sami Khedira: The World Cup winner has fallen out of favour at Juventus and has been rumoured to be reuniting with Carlo Ancelotti at Everton, the Daily Mirror says.

Gareth Bale: The Welsh winger is keen on a final season at Real Madrid after his loan spell at Tottenham is over, reports AS.

Paulo Dybala: Juventus have offered the striker a new contract amid reports the 27-year-old will not extend his stay at the Serie A side, according to Tuttosport.