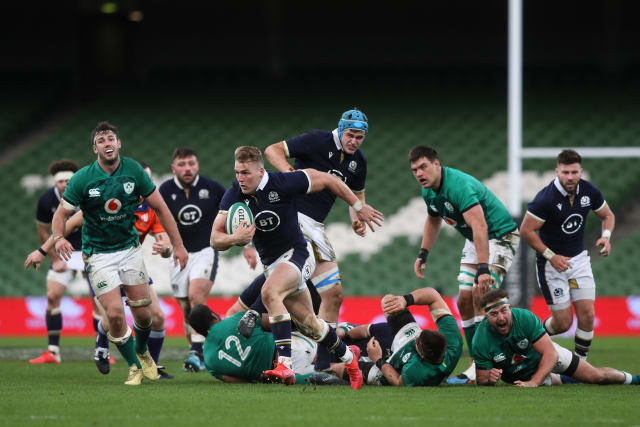 Scotland and Ireland are on a collision course for a second successive Rugby World Cup after the 2023 pool draw was made in Paris.

Ireland triumphed when the countries met in Japan last year, with Scotland going on to make a pool stage exit.

And this time around, they also have the considerable challenge of tackling world champions South Africa, who were drawn as top seeds in Pool B.

The group will be completed by qualifiers from Asia/Pacific and Europe.

England, beaten by South Africa in the 2019 final, can reflect on a relatively straightforward pool in comparison.

Head coach Eddie Jones will be reunited with his former team Japan in Pool D – he led them to a famous victory over South Africa at the 2015 tournament – Argentina and qualifiers representing Oceania 1 and Americas 2.

The coronavirus pandemic’s impact on international rugby this year meant teams were seeded based on World Rugby’s official rankings 11 months ago as some teams, including South Africa and Japan, have not played in 2020.

Wales, who have dropped from fourth to ninth in the rankings this year, were one of the countries to benefit as they were included among the top seeds.

And Wayne Pivac’s team could find themselves in exactly the same group as 2019, which they won and went on to reach the semi-finals before being beaten by South Africa.

Should those countries fill the two qualifying slots, then fourth seeds Wales will be in an identical pool of five from Japan 2019.

It is also the fifth World Cup in succession that Wales have been drawn in the same group as Fiji.

Hosts France have landed New Zealand in Pool A, providing the potential headline game of the pool stage and a possible showpiece tournament opener.

Italy, plus qualifiers representing Americas 1 and Africa 1, complete the group.

France last reached the World Cup final in 2011, and, while they have never won the tournament, a continued resurgence under head coach Fabien Galthie promises to make them among the competition favourites.

But they will also be mindful that three-time world champions New Zealand have a perfect World Cup pool record, winning all 31 games they have played.

Galthie said: “It is going to be a tough group. New Zealand have won three World Cups, so they are always dangerous.”

The 10th edition of the tournament will take place from September 8 to October 21, 2023 at nine venues across France.