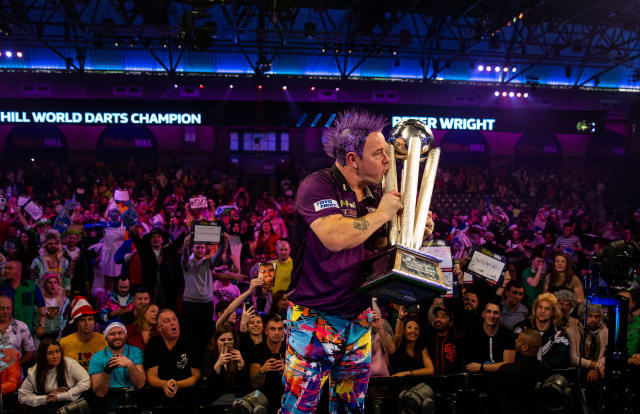 Peter Wright is thrilled at the prospect of returning to Alexandra Palace to defend his World Championship title after admitting he has been “down and miserable” playing behind closed doors.

The 50-year-old’s 2020 started with a bang as he won his maiden world crown, but has spent the majority of his year as defending champion by playing in sterile bubbles in Milton Keynes and Coventry due to the coronavirus pandemic.

With his eccentric dress sense, which usually has a festive theme at this tournament, unique mohawk hairstyle and energetic walk-on, Wright is every inch the showman and feeds off playing in front of crowds.

The Scot will get the chance to show off his individuality as the 2021 World Championship starts on Tuesday – something that makes him happy after a tough year.

“I am definitely looking forward to it, defending champion as well is going to be pretty special,” he said.

“The most important thing is that it is near Christmas and I get to go out in my Christmas outfit, up on stage in front of 1,000 people in the crowd, that is going to be more special, really, really special.

“You couldn’t have it anywhere else really. If they had it at Milton Keynes or Coventry I would have gone nuts, I would have put myself in the loony bin.

“I have been down and miserable throughout this Covid, the crowds get me up and makes me feel happy. I am going out there for the fans and the youngsters that look up to me. I do it for them.

“It is the same for all the players, we have all had to be in it and deal with it, being in the bubble and being tested every week, having sticks shoved down your neck and up your nose.

“It is horrible doing that and the hotel do their best by mixing up their food, but you are just having the same food all of the time, it just drives you nuts. You are not allowed out.

“I didn’t handle it really well, I was glad on the last day of the three weeks there, I was glad to go home, I was going nuts. For it to be at the Ally Pally, I am delighted, at last, to get on that great big stage.

“We had a little crowd in the European Championship but I won that, it was only 250 people but they inspired me because I wanted to go out and entertain them. I needed the adrenaline.

“Yes, the other ones that have been behind closed doors have been TV tournaments and you should be up for it, there’s no excuse, but it’s difficult personally for myself, other players have said you should just deal with it, but for me it was just like playing darts at home. It was very strange.”

Wright, who will open against Steve West or Amit Gilitwala, comes into the tournament with a slight rib injury, suffered when he jumped over a fence.

But he is still backing himself to win back-to-back titles and has vowed to be a three-time world champion by the time he retires.

“That would be great, but there is no pressure on me because I have achieved my dream of becoming world champion,” he said. “The pressure is on the other guys who haven’t won it.

“I will be three-time world champion before I retire. Three times and if I’m still stubborn enough and want to upset the youngsters coming through and whatever I might stay around and get it five times, maybe. I don’t know. I’ll see how the body’s doing.”