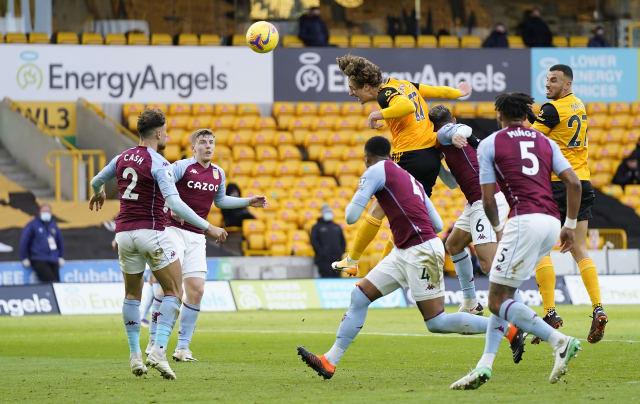 The striker made his full debut in Saturday’s 1-0 defeat to Aston Villa after his £35million summer switch from Porto.

He hit the post in the second half before Anwar El Ghazi’s injury-time penalty won it for the visitors.

Chelsea visit Molineux in the Premier League on Tuesday and, with Jimenez recovering from a fractured skull, Nuno hinted he will keep faith with 18-year-old Silva.

He said: “I think playing is the best way when you want to progress a player and keep improving as a player. When he has minutes in the competition it is good for him, it is useful.

“He’s getting to know his team-mates better and his team-mates are recognising his qualities. It’s always about helping the player – not his age. The last thing that he can think about is scoring a goal and being obsessed with that.

“Stick to your tasks, progress in the game, linking, doing defensive tasks and then the final touch will be there. More will come but I am happy with him.

“We have already got a good player on our hands, a very young boy but full of talents and we will improve them for sure.”

Jimenez joined the squad for breakfast on Monday as he continues to improve following his clash of heads with David Luiz at Arsenal last month.

“He’s improving. He was here again, he had breakfast with us and a good walk around the pitch,” said Nuno.

“It’s always a big disruption when you lose a player, especially Raul and how the situation happened, which was traumatic for everyone. We have to overcome it. Raul is going to be OK, he is going to be back to the same player and person he was.

“Now we have to work together and keep competing. It was a traumatic situation but in time I am positive, step by step, we will start asking more questions.”

Nuno will be without the suspended Joao Moutinho after he collected two yellow cards in Saturday’s derby defeat while Jonny continues to recover from a serious knee injury.

He added: “It (the sending off) was harsh but the decision is made, there’s no point talking about to. Joao cannot be with us so another player must come in.”