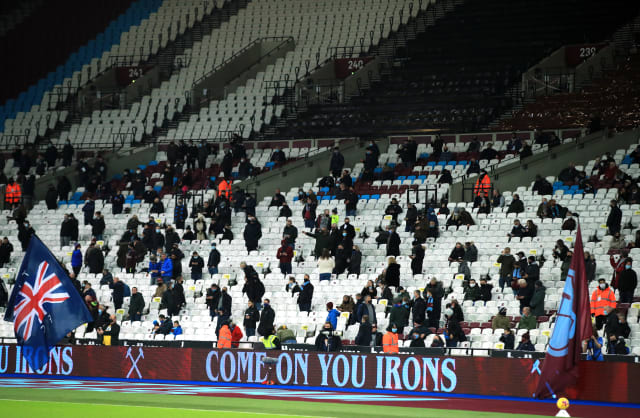 London’s move into the highest tier of coronavirus restrictions from Wednesday will impact the capital’s sporting events.

Up to 2,000 fans were allowed into football matches for the first time since March when London was initially placed in tier two a fortnight ago following the second lockdown.

But the move into tier three means once again the capital’s stadiums will be empty.

West Ham hosted 2,000 fans when they played Manchester United at the London Stadium last weekend, but their home match against Crystal Palace on Wednesday night will be behind closed doors, as will the midweek matches at Arsenal and Fulham.

Arsenal tweeted: “We are disappointed to confirm that we are no longer able to welcome fans to Emirates Stadium for our Premier League fixture against Southampton on Wednesday, December 16.”

In fact the only midweek Premier League fixture to have a crowd will be the top-of-the-table clash at Anfield when Liverpool meet Tottenham.

As of Wednesday only Liverpool, Everton, Brighton and Southampton in the top flight will be allowed 2,000 fans until the restrictions are lifted.

The William Hill World Darts Championship, at London’s Alexandra Palace, had planned to have 1,000 fans in attendance.

But the sport’s biggest event, which begins on Tuesday, will now also be largely a fan-free zone.