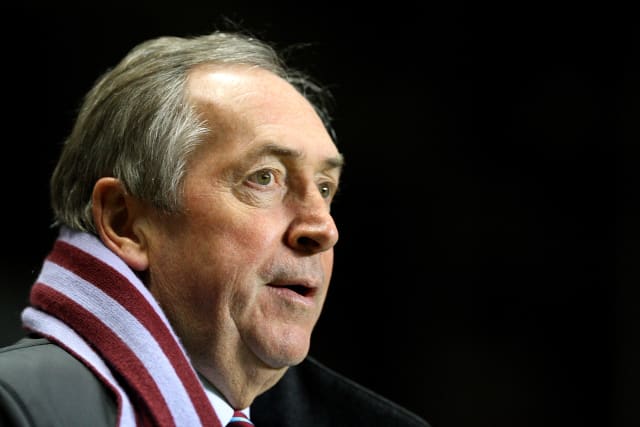 Former Liverpool manager Gerard Houllier has died at the age of 73.

The Frenchman, who also managed Aston Villa later in his career, guided the Reds to an FA Cup, League Cup and UEFA Cup treble in 2001, the highlight of his six-year spell in charge.

"We are mourning the passing of our treble-winning manager, Gerard Houllier," the Premier League champions said on Twitter.

"The thoughts of everyone at Liverpool Football Club are with Gerard's family and many friends. Rest in peace, Gerard Houllier 1947-2020."

A post from Villa read: "All at Aston Villa are deeply saddened to learn of the passing of Gérard Houllier, our manager during the 2010/11 season.

"Our thoughts are with Gérard's loved ones at this incredibly difficult time."

Houllier's death was first reported by French media, who said he had recently undergone heart surgery – having suffering from heart complications for several years.

In October 2001, he fell ill at half-time during Liverpool's match against Leeds and was diagnosed with an aortic dissection which required emergency surgery and led to a five-month spell out of the dugout.

Houllier suffered further health problems while with Villa. He was admitted to hospital on April 20 2011 after falling ill, and would not return to work before stepping down by mutual consent on June 1.

It proved to be his final job in day-to-day management. More recently, Houllier worked as the head of global football for the Red Bull group which owns RB Leipzig, RB Salzburg and the New York Red Bulls, as well as advising Lyon.

Houllier's career was marked by several successes, including the 1986 French Division 1 title with PSG and Ligue 1 titles with Lyon in 2006 and 2007, but the tributes paid on Monday also spoke to his popularity as an individual.

Michael Owen described him as a "genuinely caring man", while Ian Rush called him a "true gentleman".

Jamie Carragher wrote: "Absolutely devastated by the news about Gerard Houllier, I was in touch with him only last month to arrange him coming to Liverpool. Loved that man to bits, he changed me as a person & as a player & got @LFC back winning trophies. RIP Boss."

Another Reds player who broke through under Houllier, Steven Gerrard, wrote on Instagram: "Devastated to hear the news my former manager Gerard Houllier has passed away. I will never forget what this man did for me and my career. Rest in peace Boss ❤️ YNWA x"

Phil Thompson, who worked alongside Houllier as part of his backroom staff at Liverpool, tweeted to say: "Absolutely devastated and heartbroken at the sad news of the passing of Gerard.

"My mate, my colleague, my boss. One of the greatest moments of my life was when we came together in 1998. Just to be in his company was an absolute treat. So loyal, so passionate and extremely fierce.

"So many wonderful times, bringing smiles back to peoples faces. 2001 should never be forgotten.

"Since we finished, at the end of every conversation we had, I told him I loved him and would always be grateful for him giving a wonderful partnership. RIP Boss."

Former Liverpool forward and manager Sir Kenny Dalglish tweeted: "Very sad news about Gerard Houllier. He was a gentleman and a great footballing person; I enjoyed his company many times. His legacy at LFC will forever be appreciated, respected and never forgotten. Marina and I offer our sincere condolences to his family. RIP Gerard. YNWA."

He said on the United website: "Gerard became a really good friend during his time at Liverpool. We remained great friends after he left and he was always a great ally to have.

"He had fantastic football knowledge which he gained during his extensive and varied career. When we saw each other at UEFA meetings or other events, we would often enjoy a chat, he was always great company and I will miss him dearly. He was a true gentleman.

"It is a sad day for the football world and my thoughts are with his family at this desperately sad time."

Houllier, who never played the game professionally but played as an amateur while working as an English teacher, worked his way up through the lower ranks in France before joining Lens, where he earned promotion and qualification for the UEFA Cup.

His achievements caught the eye of Paris St Germain, where he won the French title in his first season in charge in 1986, a campaign which included an unbeaten run of 26 games.

He worked as an assistant for France coach Michel Platini before getting the top job himself in 1992, though he resigned a year later after failing to qualify for the 1994 World Cup, dropping down to coach the national youth teams before joining Liverpool in 1998.

French football federation president Noel Le Graet said: "It is with great emotion and deep sadness that I learned of the death of Gerard Houllier.

"French football is losing one of its greatest technicians, and the French federation one of its most loyal servants. Gerard Houllier has distinguished himself at all levels of football.

"In the amateur world as a player and then as a coach, in the professional world as a coach of renowned clubs, in the federation as national technical director and coach of the France team.

"French football owes him a lot. On behalf of the federation, I send our heartfelt thoughts and condolences to his family and loved ones."

Houllier was initially introduced as joint-manager alongside Roy Evans, but soon took sole charge as Evans stepped down in November of that year.

He undertook a thorough overhaul of the club after the so-called 'Spice Boys' era, and the famous cup treble came as reward in 2001.

Houllier's health problems began the following season but there was further success as they lifted the League Cup in 2003.

A failure to qualify for the Champions League saw Houllier replaced by Rafael Benitez in 2004, but he went on to enjoy further success with Lyon.