Lack of goals, indiscipline and injuries – What is going wrong at Arsenal? 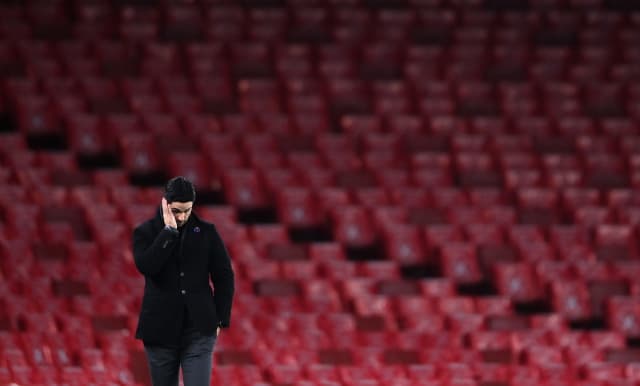 Mikel Arteta's struggling side are winless in five top-flight matches and have lost four successive league fixtures at Emirates Stadium.

Here, the PA news agency takes a closer look at some of the key issues affecting the Gunners.

Only the Clarets, West Brom and Sheffield United have scored fewer league goals than Arsenal this term. The Gunners have mustered just 10 in 12 fixtures, including only one in their last five winless games. Captain Pierre-Emerick Aubameyang has been in fine form ever since he moved to the club in January 2018 but he has only scored one penalty in his last 11 league outings, with Arsenal having 124 shots across their matches so far – the fifth lowest in the division.

Arsenal manager Arteta suggested Granit Xhaka's red card in the 1-0 defeat to Sean Dyche's side showed how committed his players are to addressing their slump. Switzerland midfielder Xhaka was dismissed for grabbing Ashley Westwood around the throat. While on-field passion can be a positive, it was the seventh time Arsenal have had a player sent off in the Premier League since Arteta was appointed almost a year ago and raises serious questions about the discipline among his underperforming squad.

Arteta is less than a week away from the first anniversary of his appointment. At the moment, there seems little reason to celebrate the occasion. When his predecessor Unai Emery was sacked, Arsenal were eighth in the table – the same position they ended the season under Arteta. The club are currently languishing in 15th place and require a swift upturn in results to ease pressure on their manager and ensure realistic hopes of European qualification are not extinguished prematurely.

Arteta has had to contend with plenty of challenges in the opening year of his managerial career, including the coronavirus pandemic which kept fans away from Emirates Stadium until 2,000 were allowed to return last week. A number of injuries have also played their part of late, with the case of summer signing Thomas Partey highlighting their bad luck. The midfielder had missed just six matches throughout his entire career before joining Arsenal but has now sat out three of the last four games with a thigh injury.

Jury out on defence

One of the priorities for Arteta when he replaced compatriot Emery was to address defensive frailties. With the savvy signing of Gabriel Magalhaes and a more structured approach to defending improving the likes of Shkodran Mustafi and David Luiz, the former Gunners midfielder has – by and large – shored things up at the back. However, his team remain far from solid and have kept only three clean sheets this term, conceding eight times in their last five games.