Gary Neville: The PFA is going to change – I can assure you of that 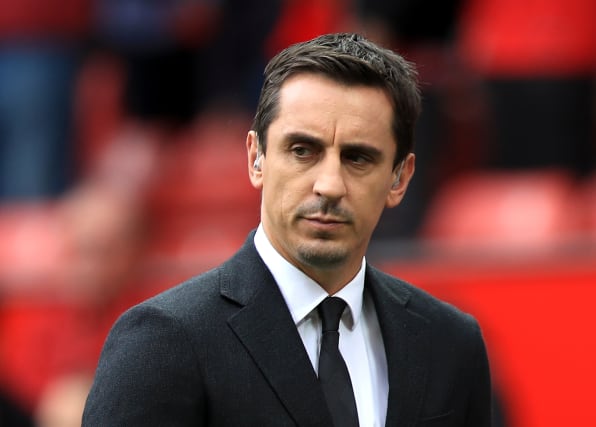 Gary Neville is confident the new-look board of the Professional Footballers’ Association will “do the right thing” over whether or not to publish an independent review into the union’s governance.

The review, led to a conclusion by Naomi Ellenbogen QC, was completed in the summer. Its recommendations have led to a restructure of the PFA which will ultimately result in Gordon Taylor’s 40-year reign as chief executive coming to an end next spring and a new leadership structure being put in place.

Controversially, though, the review itself has not been published by the PFA.

Former England and Manchester United defender Neville was part of a three-man independent selection panel which has now chosen a four-person independent advisory panel. The new panel’s first task will be to oversee the recruitment of Taylor’s successor.

Hardman is the managing director of Amazon Web Services in the UK and Ireland, Johnson is the head of marketing, global business solutions for Europe at TikTok, Koksal is the current chair of the Women In Football group and Thompson the founder and chair of the Youth Charter, a UK-based international charity. Thompson will chair the panel.

Neville believes that quartet, along with the new players’ board and the new chief executive, should ultimately be allowed to read the review and decide whether or not it is published.

“I think it would be extremely unhelpful of me today to say that that review should be published or not published based on the fact we’ve just appointed four outstanding individuals who need to get their feet under the table, they need to appoint a new CEO and I have absolute faith that they will do the right thing by themselves and by the organisation in the next 12 months,” he said.

“I see many organisations in football, and you’re all aware on this call of strategic reviews, task forces left, right and centre where nothing changes.

“I genuinely believe in the independent review I’ve read, the response of the PFA so far, the announcement that Gordon would step down next June and the four non-execs represent fresh thinking. I am comfortable with the players’ board.

There were over 420 applications initially, according to Ed Canty, who worked on the selection panel alongside Neville and John Mousinho, the Oxford defender who is part of the PFA’s management committee.

The top 80 were reviewed by recruitment firm Odgers, with that group whittled down to 35 who were invited forward for interview by the same firm. The panel featuring Neville interviewed the final 17, with a group of eight invited to a second stage interview from which the final four were chosen.

Canty said the final eight were 75 per cent ethnically diverse and 63 per cent were female.

Neville said: “I have faith that the four individuals we have selected will make the right decision for the organisation and do the right thing to ensure that the PFA is right at the front and centre of independence, transparency, good governance and making sure football comes out of this rut that it’s in whereby its leadership, in various different stakeholder groups, seems to be the same old faces walking around the scenes.

“For me this is a point of change for football governance. This is a situation whereby we could have gone down the same old, same old track, the circuit guys who have got the jobs for the last 10-15 years, which all the other organisations seem happy to do and continue to do which frustrates the life out of me, and which is why I have joined an independent group asking for an independent regulator.”

Ultimately it will be for the PFA’s members, as a trade union, to elect the quartet as non-executive directors alongside the new chief executive. The current players’ board anticipates the election will take place around April 2021.