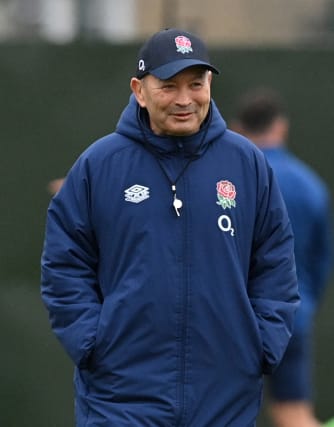 Eddie Jones is ready to write another chapter in his eventual World Cup story with Japan after his intuition that England would be drawn to face the Brave Blossoms proved correct.

Destiny has placed Jones on a collision course with the side he coached to the greatest upset in rugby history when South Africa were toppled 34-32 in Brighton five years ago.

Now at the helm of England, Jones will face the team whose success under his guidance propelled him back into the top echelon of international coaches after his Six Nations champions were placed in Pool D of the 2023 World Cup alongside Japan and Argentina.

As the draw was taking place in Paris, Jones was on holiday in Tokyo where news of the collision course was greeted enthusiastically.

“I had this strong gut feeling that we were going to get Japan and I wasn’t disappointed,” Jones said.

“I think my wife has already bought a half-English, half-Japanese shirt. I will do some work on her over the next two years to make sure she has got the right shirt on.

“The Japanese will be good fun because they will be desperate to beat us and it will be interesting – I think they’re already buying tickets here for that game already.

“I have already got a number of texts from Japanese friends saying how excited they are about the game.

“It is wonderful to see Japan in such a prominent place in world rugby and it gives that opportunity for what other teams can do.”

Four years after stunning South Africa, Japan took another leap forward by reaching the quarter-finals for the first time through a thrilling high-octane style of rugby that won hearts and minds.

Since that World Cup on home soil, they have been elevated into tier one and are positioned 10th in the world rankings with the sport’s popularity never higher.

“I know they have set up their league to completely support the Japan national team,” Jones said.

“The domestic league will go from January to May and then the national team has all the players from June to December – now what other team in the world has that?

“So they are putting themselves in the best position to keep growing and they have got good talent.

“The younger players in Japan believe they can beat teams from around the world and given the support of the national clubs to support the national team, there is no reason why they won’t keep improving.”

Jones described Pool D as the most compelling of the groups drawn for France 2023, Japan’s thrilling play augmented by the passion and physicality of Argentina. Canada and Tonga are likely to completed the line-up.

The World Cup is still three years away, but for the moment England are Europe’s dominant force after winning the Six Nations and Autumn Nations Cup, while in the process compiling an eight-Test triumphant run.

“We won the Six Nations twice, albeit the Nations Cup was in a different form, and that’s a fair achievement in itself,” said Jones.

Jones awarded England’s 2020 a 10 out of 10 despite their recent emphasis on defence and kicking winning few new fans.

“Everyone can criticise the way we played but at the end of the day, winning the two trophies was the objective. The only currency we have is winning, as you well know,” he said.