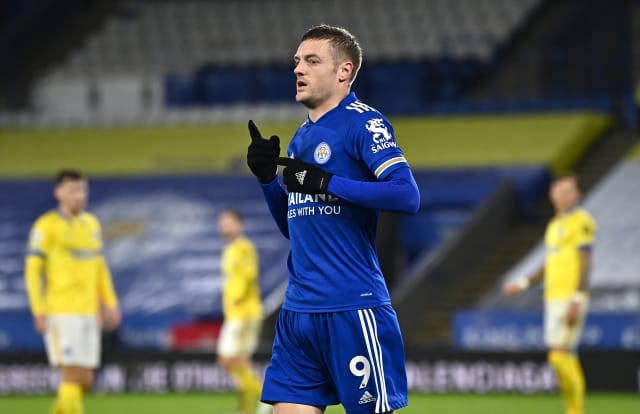 The 33-year-old’s strike in Sunday’s 3-0 home win against Brighton was his 12th goal of this season and his 113th in the competition.

Vardy is level with Ian Wright and Romelu Lukaku and has the likes of Steven Gerrard (120), Dwight Yorke (123), Nicolas Anelka (125), Robbie Keane (126) and Jimmy Floyd Hasselbaink (127) in his sights during the remainder of this season.

“Over the next few years I expect him to go on and finish with a really high number. He’s scored again and you can see in the game his running and speed and the timing of his movement is fantastic,” said Rodgers.

“I think when I first came here the thing was can he get to 100 goals. He got to 100 and now it is a case of just continuing with that mentality and score as many as he can. I think there’s plenty more goals in him.”

Leicester’s victory on Sunday, which saw them go up to third in the Premier League table and just a point behind Tottenham and Liverpool, saw them become the only team to have played in Europe to win at the weekend.

Rodgers said: “This period has been challenging but it is something we have enjoyed and the players have given absolutely everything.

“We felt the game was about being consistent and having that mentality. I think when you watch our team, we won’t always be at our best but what we will be is honest. And of course we have some quality in that.”

Defeat at the King Power Stadium for Brighton left them just two points above third-bottom Fulham, who they play at Craven Cottage on Wednesday night.

Albion then face another huge game against bottom club Sheffield United at the weekend.

“We have two big games coming up, but every match we play in this league is important,” said Brighton boss Graham Potter. “We’re a good side and we want to show that, starting on Wednesday.

“We know that we are fighting for points in the Premier League and we know how tough it is. We have to keep fighting, which we will, and try to improve the points tally we have.

“Performances have been generally okay, this is a sore one for us. We need to recover and regroup and get ready for Wednesday.”