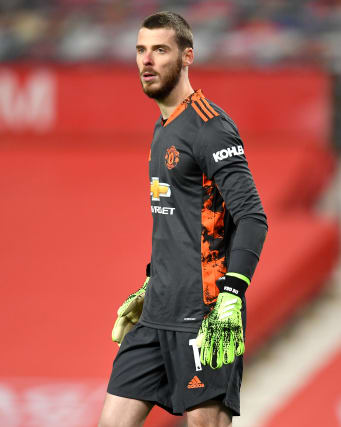 Ole Gunnar Solskjaer’s side responded well to their chastening midweek Champions League loss by battening down the hatches and securing a 0-0 draw in a drab derby clash with Manchester City.

United ended Saturday eighth in a concertinaed table but only four points off the top, with De Gea confident of challenging for a first Premier League crown since helping Sir Alex Ferguson bow out with a bang in 2013.

“It’s a very strange season. To be honest, there’s many teams there fighting for the top place, so I think we need to be very focused every game and try to win the Premier League.”

United had won their previous four Premier League matches before the tepid draw on Saturday evening, when the Red Devils showed the focus and defensive resilience that has been sorely lacking recently.

The backline came under criticism for their performance in Tuesday’s costly 3-2 loss at RB Leipzig, as did De Gea for his attempt at saving Justin Kluivert’s decisive third goal.

“I think defensively we’ve been perfect tonight,” he said. “They don’t create many chances, maybe two or three big chances, but I think against them it was defensively a great game.

“So we need to be happy of course for the clean sheet but maybe it’s not enough. We play at home. We always want to win, especially against Man City, so I think we missed a big chance to beat them today.”

Asked if there was a determination to show the true United after the midweek criticism, De Gea told MUTV: “Of course. For me, the most important thing in the team is the defensive part, so today we showed again that we can defend very good.

“We can be very strong in the back four. I think the whole team pressed really high, so we made them make mistakes in the build-up.

“I think it was a good game for us, a tight game, so the draw was fine.”

The empty stands no doubt contributed to the limited bite and intensity, while City midfielder Rodri bemoaned a costly lack of cutting edge at Old Trafford.

“The performance was alright,” he said. “I think we had good times in the match, other times they push us a little bit.

“I don’t remember any big chances for them. We had two or three big chances and we have to score these.

“That’s our weak point in recent matches and that’s where we have to work. It’s not easy to play every two, three days. We play Champions League like them. We tried but you are not 100 per cent fit every game.”