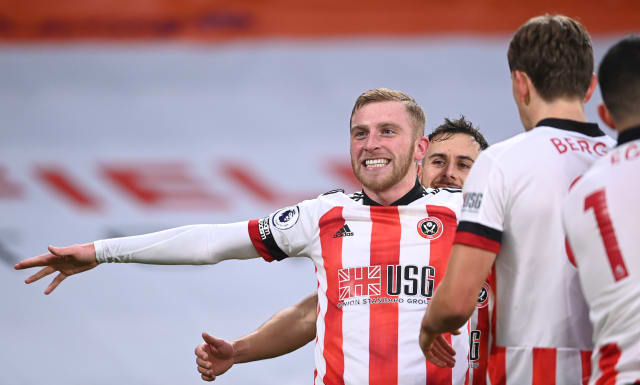 The Scotland international, a club-record signing for the Blades when he moved to Bramall Lane from Swansea in the summer of 2019, scored six times during his maiden top-flight season but has struggled to find the back of the net during this campaign.

It has seen him become the subject of heavy criticism from some United fans as their team has made the worst ever start to a Premier League campaign by any club, while McBurnie was also on the receiving end of flack from Scotland supporters last month, having gone 14 games without a goal for his country.

The 24-year-old broke his duck and lifted a huge weight from his shoulders with the Blades’ only goal in their 2-1 home defeat by Leicester last weekend and Wilder explained how he was impressed by McBurnie’s character through his barren spell.

“I believe in him. You’ve got to scrap your way out of it. The sun is not shining at the moment and that’s when you get judged, and he’s battling his way through it,” said the Blades boss, whose side face Southampton at St Mary’s Stadium on Sunday.

“That, for me, tells you something about his bravery and his character. It tells you that he cares and what type of person he is.

“It was a man’s performance from Oli (against Leicester). Everybody was delighted he got his goal. He knows he should have had more this season – as we all should have – but I believe in him and the group.

“He brings more to the team than goals and it was his all-round performance on Sunday that I thought was excellent.”

Wilder is hoping for a triple injury boost against Southampton. Enda Stevens, Ethan Ampadu and Lys Mousset all resumed training this week and provided they come through Saturday’s session unscathed, Wilder will be able to call on them at St Mary’s.

Stevens has missed the last three games with a knee injury while Ampadu, on a season-long loan from Chelsea, has been carrying a hip problem for the last three weeks. Mousset has been limited to just 17 minutes of game-time this season having only recently made his return from a toe injury.