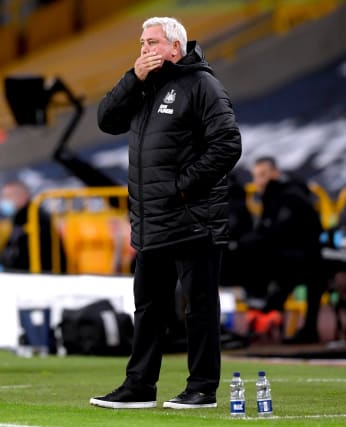 Steve Bruce is optimistic that Newcastle have curtailed the outbreak of coronavirus at the club’s training ground but will be without “a big chunk” of first-team players for Saturday’s Premier League clash with West Brom.

Bruce would not reveal the identities of those players who will be missing from the game due to positive tests or associated protocols, but said new cases have arisen at the club in tests carried out on Monday and Wednesday.

Two members of the club’s non-playing staff are currently “poorly” with the virus, which swept through the club and forced the postponement of last Friday night’s scheduled Premier League game against Aston Villa.

Bruce said: “We’ve got far more than what we thought we would have last Monday. We’ve got two or three who have had it and come back into the squad, and we didn’t think they would come back so quickly.

“We’ve got enough to pick a team and see how we go. It was a significant number of people in a tight-knit group and we will be without a big chunk of players tomorrow, that’s for sure.”

Although the majority of players are understood to have been asymptomatic, Bruce revealed continued concerns over two members of the non-playing staff.

“I’ve got two members of staff who are poorly and sick with it,” added Bruce. “{They} are not very well at all, and it really hits home when someone you work with every day of your life, and who works with the players, are finding it tough.”

Preparations for the game have clearly been hampered, with the club’s training ground closed for 10 days in total prior to its reopening on Wednesday, but Bruce said stressed it had not crossed his mind to seek a second postponement.

Bruce added: “We’ve done everything we possibly can to get the game on and make sure we don’t fall foul of a fixture pile-up, because we’ve got a huge month coming up.

“Don’t get me wrong, I would love a fit, strong, healthy squad but we have enough to make sure that we will be competitive in the game.

“We won’t use it as an excuse. Last Christmas we had seven or eight missing because of injury, so these things happen, but I don’t think anyone would have thought it would have been a virus which had taken its toll.”

Players were given individual fitness regimes during their period of self-isolation and Bruce said he detected a renewed enthusiasm in the way they returned to group action on Wednesday.

“All of them bounced in on Wednesday like kids in a sweet shop because they hadn’t trained or played,” he added.

“We hadn’t seen each other since Crystal Palace, but thankfully on last Monday and Wednesday we had no further problems so let’s hope we’ve contained it and we can get on with playing four games in 10 days and a big challenge ahead.”