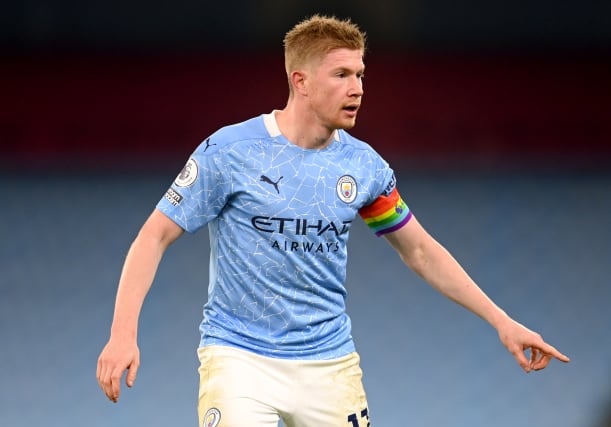 Kevin De Bruyne has warned that Manchester United could flip the switch and rediscover their best in this weekend’s derby against Manchester City.

United head into Saturday’s clash at Old Trafford ahead of their rivals in the Premier League but under the greater pressure having been eliminated from the Champions League in midweek.

United have been inconsistent throughout the campaign so far but, when questions have been asked after disappointing results, they have typically responded with a positive performance.

City playmaker De Bruyne would not be surprised if the same happened again after some deep soul-searching at United following Tuesday’s damaging loss at Leipzig.

De Bruyne said: “We need to be careful because, (after) everything that has happened this week, it is a good game for them to change the switch.

“They will want to show a different side to what happened in Leipzig and we need to be aware of that. In the end it is similar for them as it is for us, both teams want to keep momentum from the last few weeks and it is important to do that.”

United have won just one of their five Premier League home games this term but De Bruyne is not reading anything into that.

“It doesn’t mean anything,” he said. “This is a different game and I can understand that, when you are a big club like Manchester United, that teams are going to set up more defensively when they play away.

“That is maybe where they had some issues. I am not too sure as I have not seen every game.”

De Bruyne is key to City’s hopes of success and the 29-year-old has no problem carrying that responsibility.

He said: “Now I am one of the older guys in the locker room and I have been here for six years, so I know how everything works and I think it is the normal evolution you get as a player when you are in the team.

“I think it is good to be a leader of the team. It is going to help you also in your life outside the pitch, so it is important to take the responsibility.

“It is what you have to do on the pitch but also do the same and set a tone of how people should behave off the pitch.”

United are a point ahead of City in the table – and were temporarily just two points off the top with a game in hand at one point last weekend – but their inconsistency has increased the scrutiny on manager Ole Gunnar Solskjaer.

Opposite number Pep Guardiola feels that is unfair but something that goes with the territory.

“For me he’s an exceptional manager,” said the Spaniard. “I cannot say much because I am not there in the locker room but (it is because of) how he handled the team and how he represents United all around the world.

“I know, Ole knows, everyone knows it depends on results but I have a high opinion about his work at United.”

United have come from behind to win their last two Premier League matches.

City boss Guardiola said: “I know they came back against West Ham, against Southampton and almost against Leipzig. Against a big club you have to play for more than 90 minutes.”