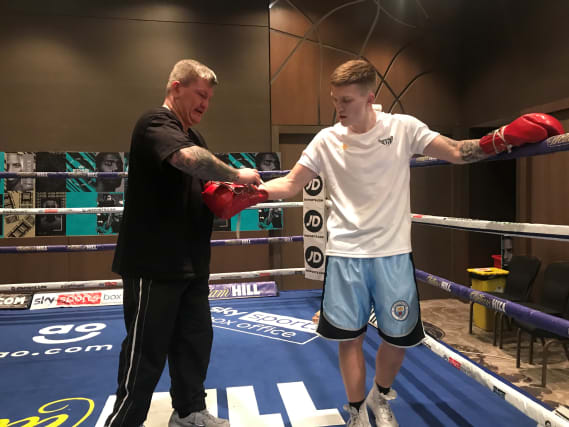 Campbell Hatton insists he is ready to handle the pressure that will come with being Ricky Hatton’s son after he turned professional on Thursday.

The 19-year-old has signed a multi-fight deal with Matchroom and will start life in the paid ranks at super-featherweight level in February.

During a career spanning 48 bouts, his dad Ricky was a two-weight world champion, fighting the biggest names in the sport, and now he will watch his son follow in his footsteps.

“I can’t wait to get going and as soon as they see me in the ring they will know it is a style to take to, with the aggression but I also like to think and box as well so I think it is a style the fans will love,” Campbell said.

“There will be pressure that comes, that’s a given but the way I train, it is something that drives me.

“People will be thinking ‘Ricky Hatton’s son’ but I am working towards getting away from that and being Campbell Hatton, not Ricky Hatton’s lad and the way I train that is what’s coming.”

After being unveiled at a press conference during fight week for the Anthony Joshua versus Kubrat Pulev clash, Campbell was put through his paces by Ricky in an open workout session.

With Manchester City shorts on and Oasis blaring out in the background, for many it would have been like going back two decades to when Ricky first started out.

Campbell’s dad ended his career after a defeat to Vyacheslav Senchenko at the Manchester Arena in 2012 and despite no fairytale finish, the venue was host to a number of memorable nights for ‘The Hitman’.

Campbell added: “There is a special atmosphere at the Manchester Arena, some of the nights I’ve watched like Scott Quigg, Anthony Crolla, my dad.

“I want to add my name to that and put them special nights on and get Manchester supporting me.”

Ricky admitted to a sense of deja vu with his son being unveiled during a big fight week like he did during the Naseem Hamed-Billy Hardy clash in 1997.

And while the 42-year-old achieved a huge amount during a stellar career, he has told his boy to target greater honours.

“When I was a kid I wanted to be world champion, watch Man City and listen to Oasis and that is exactly what he wants to do.

“I never wanted him to turn pro, if I am brutally honest. He will always be my baby and I didn’t want him to turn professional because I felt I did it so he didn’t have to.

“And he was a little bit of a late bloomer, it took him a little while to get into boxing, but when he got to a certain age he started watching videos. He’d get YouTube up and the minute he started to get into it more, the more I could tell.

“I said to my brother Matthew he is hooked and has it. He has put his heart and soul into it over the last few years and the rate he has improved shows how dedicated he is, how much he listens and how he puts everything into what he does.”

Campbell is trained by his uncle Matthew Hatton and Ricky knows his following will get behind the prospect.

He added: “The minute you see him fight and do an interview and the style he has got and the type of person he is, my fans will be his fans.

“Not for me, for Campbell. I am very excited about the future. We have brought him up in the right direction to be confident, but humble, be aggressive but have your wits about you.

“All those things and attributes will get him to the top and he don’t need me. Eventually he will have to do it on his own, I can’t do it for him and I think he will.”