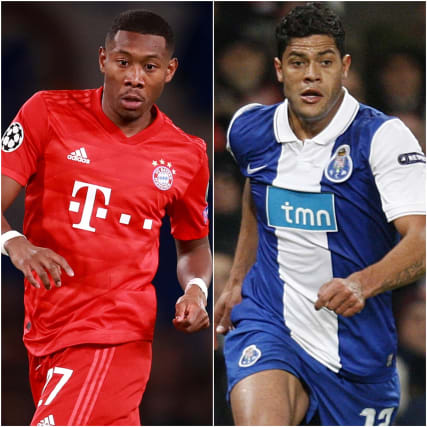 Chelsea are believed to be on a shortlist of potential destinations for Bayern Munich defender David Alaba, if he decides to leave the club next summer. The Sun, via Bild, reports Alaba’s agent has marked four clubs for the 28-year-old to consider: Chelsea, Barcelona, Real Madrid and Paris St Germain. However there are doubts as to whether the Stamford Bridge club would be able to afford Alaba’s reported £350,000-a-week wage demands.

The Sun also reports Brazilian striker Hulk is willing to take a 90% pay cut to ensure a move to the Premier League. Citing Portuguese outlet Record, the paper says the 34-year-old is willing to make some financial concessions to secure his desired destination after turning down an opportunity to extend his contract with Chinese Super League club Shanghai SIPG. West Ham are believed to be interested in his signature, though Porto and Zenit St Petersburg are among a host of international clubs also touted to be in the mix.

Arsenal and Wolves are reportedly among the clubs eyeing a move for Valencia striker Maxi Gomez. According to the Daily Mail, Valencia are looking to offload the 24-year-old in order to raise some much-needed cash. The Gunners view Gomez as a potential solution to their attacking woes, while Wolves are searching for a replacement up-front after Raul Jimenez fractured his skull.

The Gunners are also among a host of Premier Clubs keeping a close eye on Bayer Leverkusen winger Leon Bailey. The Mail says Arsenal, Tottenham, Everton and Manchester United will all have scouts at Leverkusen’s Europa League tie with Slavia Prague on Thursday following a number of impressive displays by the 23-year-old.

According to The Sun, NAC Breda forward Sydney van Hooijdonk could join Nottingham Forest on a free transfer in January, though Swansea and Sheffield Wednesday are also believed to be interested in the 20-year-old. He is the son of ex-Forest man Pierre van Hooijdink.

Paul Pogba: Manchester United privately believe Juventus and Real Madrid might not be able to afford the 27-year-old, according to ESPN.