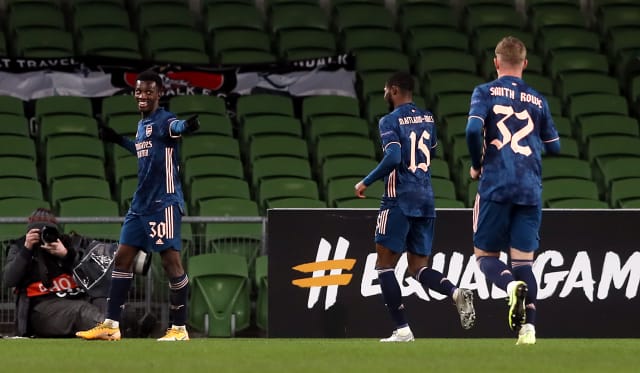 Eddie Nketiah became Arsenal’s leading goalscorer this season as the Gunners ended the Europa League group stages with an entertaining win away to Dundalk.

With Mikel Arteta’s men misfiring domestically, the second string again showed them the way in a 4-2 victory at the Aviva Stadium.

Nketiah opened the scoring and Mohamed Elneny added a second before Jordan Flores pulled one back for the hosts.

Joe Willock and Folarin Balogun pulled Arsenal further clear after the break, although Dundalk would grab a late consolation through Sean Hoare.

Dundalk may not have posed as many problems as Arsenal’s recent Premier League opposition but, with captain Pierre-Emerick Aubameyang not scoring from open play since the opening game and stuck on four goals for the campaign – the same as Alexandre Lacazette, Nketiah could now be pushing to replace the pair.

Arsenal had already assured themselves of top spot in Group B, with Dundalk eliminated, as Arteta gave his fringe players and a number of youngsters the chance to impress.

Arsenal have not won in the league since a 1-0 victory at Manchester United in a game where Elneny excelled, and the Egypt midfielder doubled the lead against the new Irish Cup winners with a fine, long-range strike – his first for the club in three years.

The visitors would not have it all their own way as former Wigan youngster Flores reduced the arrears before the break, with both Cedric Soares and Ainsley Maitland-Niles drawing smart saves out of Gary Rogers with low drives.

With 14 players out of contract after this game, Dundalk refused to crumble in what would be their final game of the season, even as Arsenal dominated the start of the second half.

Arteta replaced his goalscorers just after the hour-mark as Dani Ceballos and Balogun were introduced.

Balogun grasped the chance to shine, holding up the ball well and laying on Willock for the third goal just minutes after coming on.

The 19-year-old forward then added his second senior Arsenal goal at the end of a good move.

Arteta also handed debuts to England Under-18 international duo Ben Cottrell and Miguel Azeez as the Spaniard looked to take as much as possible from what was a dead-rubber, with Calum Chambers seeing the offside flag rule out a last-minute goal on his first start in almost a year.

Hoare turned home a late free-kick to give Dundalk a lift, while Arsenal return home to host Burnley in the Premier League on Sunday.

After another impressive European display, it remains to be seen if any of the team retain their place against the Clarets.